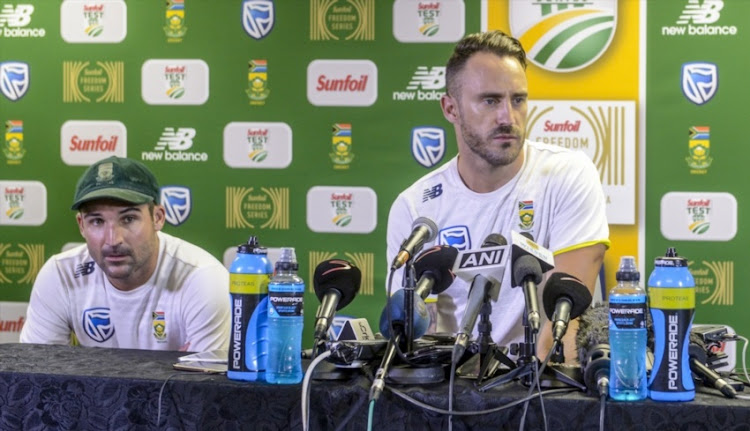 Captain Faf du Plessis of South Africa with Dean Elgar at the press conference during day 4 of the 3rd Sunfoil Test match between South Africa and India at Bidvest Wanderers Stadium on January 27, 2018 in Johannesburg.
Image: Sydney Seshibedi/Gallo Images

Even after taking serious blows to his helmet for almost six hours because of the misbehaving Wanderers pitch‚ Proteas opening batsman Dean Elgar says he won’t change his tenacious way of playing cricket.

"I can’t go out there and play an AB de Villiers knock.

"If you want that you have to look elsewhere because I am not going to be able to do that.

"I am not going to be able to play a Hashim Amla knock because those are special cricketers. But what I have is potentially something that they don’t have.

"I think this is a great make up for our Test side.

We have guys who can grind it out and we have guys who have the ability to play special knocks. It will be awesome if I was a little bit talented‚” he said. Elgar‚ who felt that the third Test against India should have been called off on the third day due to the uneven bounce and excessive sideways movement‚ said his bruises were personal reward for the job he did for the team. “It is nice bruises to be honest‚" he said.

"I have something to show for it and it is personal reward.

"It was a tough battle and something that I enjoy as a player‚” he said in reference to the match.

After he was hit by a nasty bouncer on the helmet before the match was called off early for safety concerns on Friday‚ Elgar went through concussion tests and returned on Saturday to end his innings unbeaten on 86 in the Proteas’ 63 run defeat.

Elgar at least took home the accolade of being the first South African to carry his bat twice through a completed Test innings.

“It is always special when you have contributed with the bat or ball for your country‚" Elgar said.

"My way is only limited with the bat.

"On Friday night it was unfortunate that someone had to be hit on the face for action to be taken.

"But it was out of our hands and we had no say in regards to that matter.

"We came up just short of winning the match and it gives me pleasure to know that we tried our best.... (But) sometimes your best is just not good enough‚ but it was a good outing. “This knock is right up there with the tougher knocks I have played but it is not satisfactory.

"It was mightily difficult to score more than 80.

"I have faced many fast bowlers before and I know that the Wanderers does have pace and bounce' but I have never experienced it like this.”