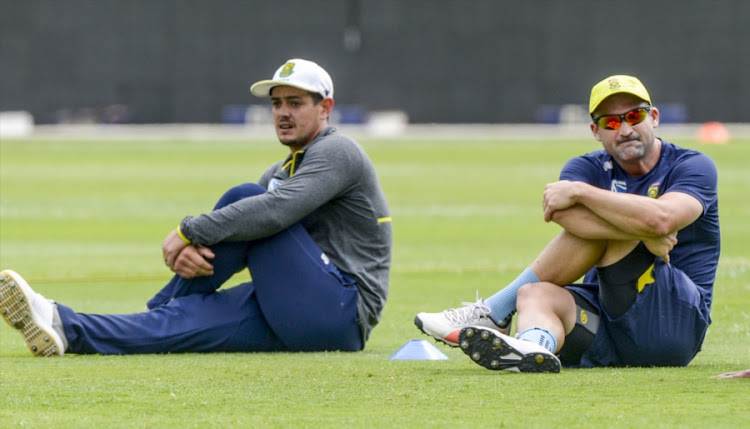 Proteas batsman Quinton de Kock will be given the five-match ODI series against India to rediscover his form.

The South Africans take on India in the first of five limited overs at Kingsmead Stadium in Durban on Thursday and De Kock is expected to open the batting with Hashim Amla.

De Kock struggled with the bat during South Africa’s 2-1 Test series win over India with a poor return of 71 runs in six innings and he was outshone by bowlers Kagiso Rabada and Keshav Maharaj who scored 76 and 74 respectively.

Reacting to De Kock’s recent struggles‚ Proteas captain Faf du Plessis said the left-hander’s place in the squad is not threatened but he must use the ODIs to gain confidence as Australia are coming to SA for a four-match Test series in March.

“Not at all‚” was Du Plessis’ quick reaction when he was asked if De Kock should worry about his place.

“We all go through lean patches.

"I think white ball cricket is coming at a good time to unshackle him.

"He is obviously disappointed like any player would but he will go back‚ work on his game and make sure that he is ready for the Australia series.”

Though he struggled with the bat‚ De Kock made a good contribution behind the stumps with the gloves as he ended the series with 17 dismissals.

Du Plessis said they would work with De Kock behind the scenes to ensure that he overcomes the challenges that are restricting him to play freely.

“With Quinny‚ he is a personality that doesn’t think too much about technical stuff‚" he said.

"He is a free spirit and an X factor player for us. So‚ when things go wrong‚ like any other player‚ you feel under pressure to perform‚” he said.

“It is just an issue of confidence and when he starts hitting the ball in the middle‚ he will jump back into that boat of relaxing and playing his game.

"I think it is important that he doesn’t change the way that he plays because you don’t want to start talking technical things to him because he has never played the game like that.

"He is at the bottom of the wave at the moment and I know that he will fight back.”

The Wanderers in hot water after pitch debacle

The Wanderers is in hot water and facing the possibility of a ban if the match officials in charge of the third Test between South Africa and India ...
Sport
4 years ago

Even after taking serious blows to his helmet for almost six hours because of the misbehaving Wanderers pitch‚ Proteas opening batsman Dean Elgar ...
Sport
4 years ago

For a match that has had to come to grips with abandonment issues, this may yet prove to be a clash that stood the test of time.
Sport
4 years ago