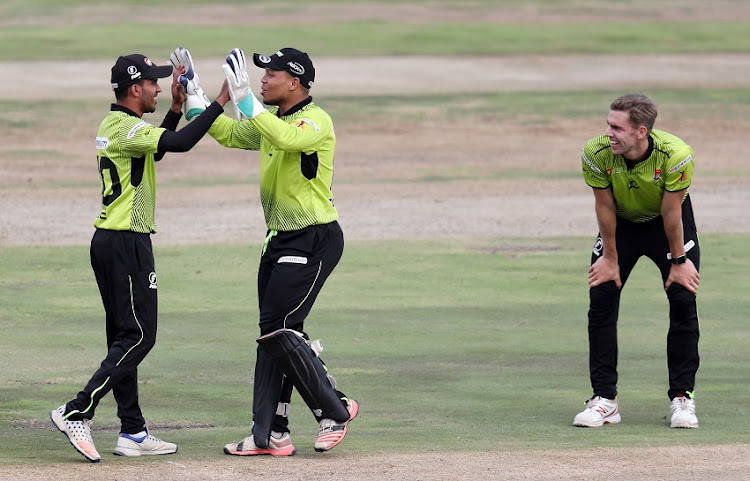 Yaseen Vallie of the Warriors celebrates catching out Farhaan Behardien of the Titans with teammates during the Momentum One Day Cup 2017/18 Semi Final match between The Multiply Titans and Warriors at SuperSport Park, Centurion South Africa on 30 January 2018.
Image: Muzi Ntombela/BackpagePix

The Warriors chose the best possible time to snap their five-match Momentum 1-Day Cup losing streak against the Titans when they ambushed the defending champions at home.

The Titans were always going to be hard-pressed to defend a below-par 230, a target the Warriors made light work of with an eight-wicket triumph. It was a sweet and well-deserved victory for a side that's been routinely embarrassed by the Titans.

Last year, they were shown flames to the tune of 236 runs in last season's final. The roar from the Warriors dressing room when the winning runs were scored by captain JJ Smuts underlined how much the win meant to them.

The Warriors will wait on the winner between the Dolphins and the Cape Cobras at Newlands on Wednesday to see whether they'll be travelling to Durban or Cape Town for Friday's final.

An explosive 117-run opening partnership off only 105 deliveries between Lesiba Ngoepe (69) and Gihahn Cloete (56) allowed the visitors to coast home with 91 balls to spare.

Ngoepe and Cloete raced to their 50's in 46 and 44 balls respectively before gifting their wickets to Malusi Siboto and Heinrich Klaasen.

Man-of-the-match Smuts (73*) added a measured 43-ball half century to ensure a collapse was staved with a high degree of comfort.

The Titans were heavily indebted to Farhaan Behardien, whose batting skill-set was clearly above this level of cricket.

While his exclusion reasons were made clear by convenor of selectors Linda Zondi last week, AB de Villiers's finger injury could have and would have opened the path for him in the national team.

His mature and well-paced 67-ball 57 hauled the Titans from a potentially problematic 115/4 after the loss of Klaasen's wicket to a stable 221/9 after Warriors captain Jon-Jon Smuts won the toss and fielded first on a slowish surface.

The Titans had slipped to 177/8 and looked in danger of not seeing out their overs. Eventually, they were bowled out two balls short of completing their allotment,

The Titans had a relatively sedate and untroubled start through Tony de Zorzi (27) and Henry Davids (19).

Their alliance spanned 11 overs and 47 runs as the latter was neatly snaffled by Andrew Birch (1/41) off his own bowling.

Davids never looked like coming to grips with the lack of pace and the accuracy of the Warriors and feathered one to Clyde Fortuin off Anrich Nortje (3/45).

The catch off Nortje was the first of five for the talented stumper as Dean Elgar (20), Heino Kuhn (20) and Malusi Siboto (five) gave Fortuin some catching practice from regulation edges off Aya Gqamane (2/40)

Only Behardien's skier gave Fortuin any sort of palpitations but his surety with the gloves mirrored the neat outfielding the Warriors married with their tight bowling.

The Titans were unable to get away nor string decent partnerships while the Warriors were able to cope with the loss of Magala. The burly paceman limped towards the end of his eighth over.

Without Behardien, the Titans faced the real possibility of sinking without a trace but his Titans record 44-run ninth-wicket with Junior Dala (seven) allowed the hosts to set up a reasonable but far from sufficient total.