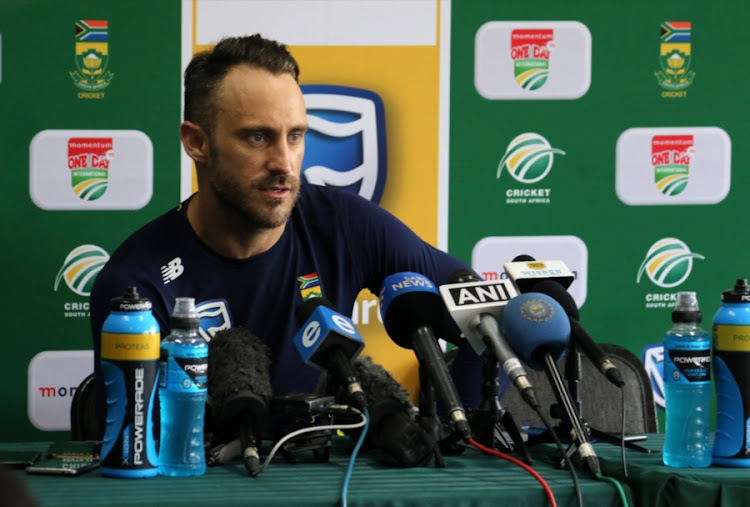 Here we go again. Five days after their intense test series ended at the Wanderers‚ South Africa and India will clash again at Kingsmead on Thursday.

Five days after their intense test series ended at the Wanderers‚ South Africa and India will clash again at Kingsmead on Thursday.

This time the ball will be white‚ the kit coloured‚ and the pitch flat.

That was Faf du Plessis at his press conference on Wednesday‚ curtly but politely trying to put to bed the justifiable fuss over a Wanderers Test pitch that the International Cricket Council labelled “poor” on Tuesday.

Not that the heat will be off the Indians‚ who have won only five of the 26 completed ODIs they have played against South Africa in this country.

“I think it tells a story‚” Du Plessis said.

“It means there is something there that’s difficult for a touring team to get accustomed to.

“But this Indian team has the names on paper to change that.

“Conditions were bowling-friendly [in the test series] but I was surprised at how consistent the Indian seamers were.

"From a batting point of view there are a few inroads we could make.”

This ODI series is unusual in that it comprises six games‚ and that South Africa’s thinking is different.

“We’ve always tried to focus on the now.

"Then‚ when you get to a big tournament‚ that becomes your focus as well.

“This is the first time we’ve taken a small step away from the now and a bigger step into the future.

"This is the first time that every conversation we have is about seeing how we can have a look at more players.

“Obviously the now is important — we play series to win series.

"But there’s a big focus on how we can get a lot of the guys opportunity.”

A case in point is that AB de Villiers‚ who will miss the first three games against India with a finger injury‚ will be replaced on Thursday by test opener Aiden Markram.

That‚ Du Plessis said‚ would give Markram the “opportunity to bat in different places in our order; that’s a great way to evolve your own game”.

The idea is big but the logic is simple.

“A year-and-a-half‚ two years from now you want to make sure there’s a group of players who have had time in the middle and time in pressure situations‚” Du Plessis said.

“So you don’t just hope that your [first-choice] XI is fit all the time.

“You do everything you can to try and win every game but I think we’re a bit more focused on two years’ time.”

What Du Plessis didn’t have to say is that all of South Africa’s energies will be trained on winning the 2019 World Cup in the 29 ODIs they will play before the tournament.

India’s current schedule also shows 29 ODIs. Having won the World Cup‚ in 1983 and 2011‚ their desperation to add a third title might not be as intense as South Africa’s bid to break their duck.

Then again‚ Du Plessis’ team won’t feel the heartbeats of more than a billion people willing them to triumph in England in 2019.

That can be as good as it can be bad‚ but the South Africans already have enough to think about — in the now as well as in the future.

The familiarity of beating the Warriors led to some contempt from the Titans and their coach Mark Boucher said they were in cruise mode in their ...
Sport
4 years ago

The Warriors chose the best possible time to snap their five-match Momentum 1-Day Cup losing streak against the Titans when they ambushed the ...
Sport
4 years ago

Considering that the Test series between South Africa and India won’t be forgotten in a hurry‚ the one-day rubber will have to be something special ...
Sport
4 years ago