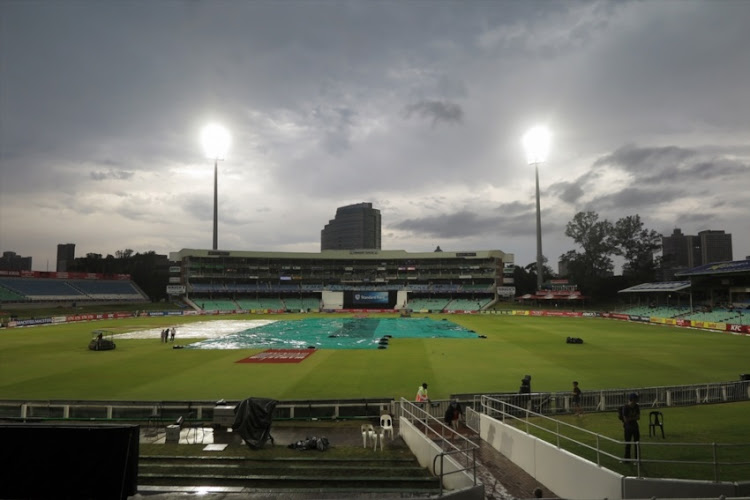 Match stopped due to rain storms and lightning during the Momentum One-Day Cup, Final match between Hollywoodbets Dolphins and Warriors at Sahara Stadium Kingsmead on February 02, 2018 in Durban.
Image: Anesh Debiky/Gallo Images

With rain having the final say at Kingsmead, the Warriors and the Dolphins will have to slug it from scratch on Saturday to determine who is South Africa's crack 50-over franchise unit.

The Warriors were well on their way to chasing a meagre total on a used surface in the Momentum 1-Day Cup final when the umpires pulled the players from the field with 10.2 overs remaining of the Dolphins innings.

If it wasn't for Senuran Muthusamy's tenacious unbeaten 53 and Vaughn van Jaarsveld's 42, the Dolphins would have been beached during low tide.

Muthusamy's half-century shepherded the hosts to the tentative safety of 154/6 before lightning and the predicted rain showers took charge.

The Warriors made great use of their toss advantage when they reduced the Dolphins to 48/4 after 11 overs.

The omens didn't look good for the Dolphins from the get-go when Morne van Wyk (six) played around a straight Andrew Birch (2/29) delivery to leave the hosts struggling at 16/1 in the third.

Sarel Erwee (13) followed him to the dressing four overs later when he was trapped plumb in front by Colin Ackermann (1/25).

39/2 became 43/3 when Dane Vilas (three) failed to make his ground after a sharp Christiaan Jonker throw beat him to the crease.

Sibonelo Makhanya (0) got a rough decision from Bongani Jele when he was given out leg before off a Birch delivery that was clearly missing leg stump.

Van Jaarsveld surveyed the carnage from the other end and fashioned a 41-run fifth wicket stand with Muthusamy.

Van Jaarsveld criminally gave his wicket away when set when he holed out to Sisanda Magala at mid-on off Anrich Nortje (1/14).

Muthusamy held firm and brought up his 50 off 83 balls while losing Keshav Maharaj (20) to Ayabulela Gqamane (1/19) to leave the Dolphins tottering at 121/6 in the 32nd over. Muthusamy and Robbie Frylinck (12) crossed the 150 mark before the weather closed in.