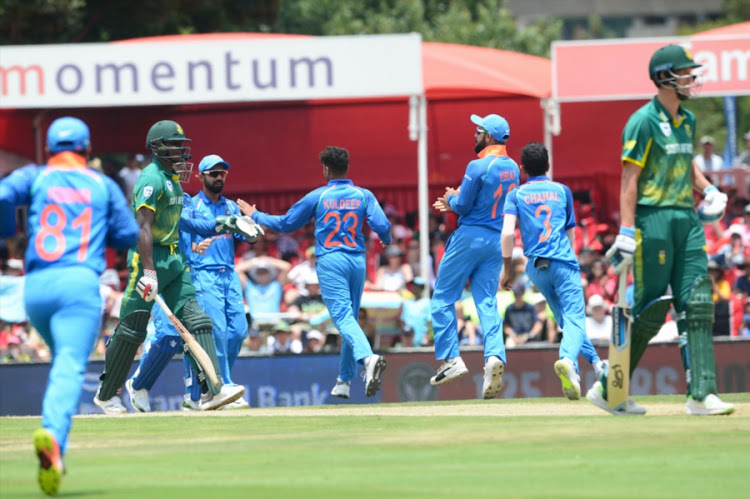 India celebrate the wicket of Kagiso Rabada of the Proteas during the 2nd Momentum ODI match between South Africa and India at SuperSport Park on February 04, 2018 in Pretoria, South Africa.
Image: Lee Warren/Gallo Images

South Africa were handed a heavy and embarrassing nine wickets defeat by India in the second ODI at SuperSport Park in Centurion on Sunday.

As expected‚ India did not have any problems chasing the modest target of 119 set by the South Africans.

The hosts batted awfully after stand-in captain Aiden Markram lost the toss and he was inserted to bat by Virat Kohli.

India crossed the line after 20.3 overs and 84 minutes‚ their inspirational captain Virat Kohli and Shikhar Dhawan were standing tall and unbeaten on respective scores of 56 off 50 and 51 off 56 balls and having put up a partnership of 93 off 100.

When the umpires bizarrely ordered the players to lunch with India needing only two runs to win finished just after 2.30pm‚ there were still 29.7 overs and 177 balls remaining in the day’s play.

The Proteas were bowled out for 118 after 32.2 overs and 135 minutes‚ which is their lowest ODI total in South Africa‚ on a day they performed poorly with the bat and none of their batsmen scored more than 25 runs.

This heavy defeat also handed 23-year old Markram‚ who become the 10th youngest captain to lead an ODI side eclipsing Indian batting great Sachin Tendulkar by just three days‚ a baptism of fire as a leader at this level.

One of the strange decisions by Markram was when he only used spinners Imran Tahir and Tabraiz Shamsi after the eleventh over on this slow pitch and together they bowled a combined 8.3 overs as he persisted with the quicks.

To show how poor South Africa were in front of a packed SuperSport Park‚ they lost their last six wickets for just 19 runs as they struggled to cope with the devastating Indian wrist spin of Yuzvendra Chahal and Kudeep Yahav.

Chahal‚ who ended with figures of 5/22‚ and Yahav (3/20) took advantage of a pitch that provided a slow turner to mesmerise their hosts as they jointly accounted for the eight Proteas wickets that fell on the day.

Fast bowlers Bhuvneshwar Kumar and Jasprit Bumrah took one wicket each as the Proteas struggled in the absence of inspirational senior batsmen AB de Villiers and captain Faf du Plessis. The two missed the action as a result of injuries.

India have taken a 2-0 lead and another victory at Newlands in Cape Town on Wednesday will see them avoid defeat in this six match series with three more encounters to come in Johannesburg‚ Port Elizabeth and back here in Centurion.

India’s chase started with some controversy when TV umpire Ian Gould overruled his colleague on the field Adrian Holdstock.

Holdstock gave out Rohit Sharma for caught behind even though there was no conclusive evidence from Ultra-Edge that the Indian opener’s bat connected with the pad.

However‚ the was no question a few overs later when Kagiso Rabada finally removed Sharma having scored only fifteen runs when he was caught by Morne Morkel at short fine leg.

SA u19 coach not too bothered by a possible frosty reception

Having experienced a heatwave‚ a cyclone and snow in the last few days‚ a frosty reception is the least of SA u19 coach Lawrence Mahatlane’s concerns ...
Sport
3 years ago

Rain is often cricket’s enemy in Durban, but on Saturday it helped the Dolphins earn a share of the spoils in the One-Day Cup (ODC) final against the ...
Sport
3 years ago

Markram will captain Proteas after only two ODIs

The Proteas’ team management have looked towards the future by appointing 23-year old batsman Aiden Markram to captain South Africa for the remainder ...
Sport
3 years ago

T20GL future to be decided 'in a couple of months'

South Africans should know “in a couple of months” whether the troubled T20 Global League (T20GL) has a future‚ Cricket South Africa (CSA) said on ...
Sport
3 years ago