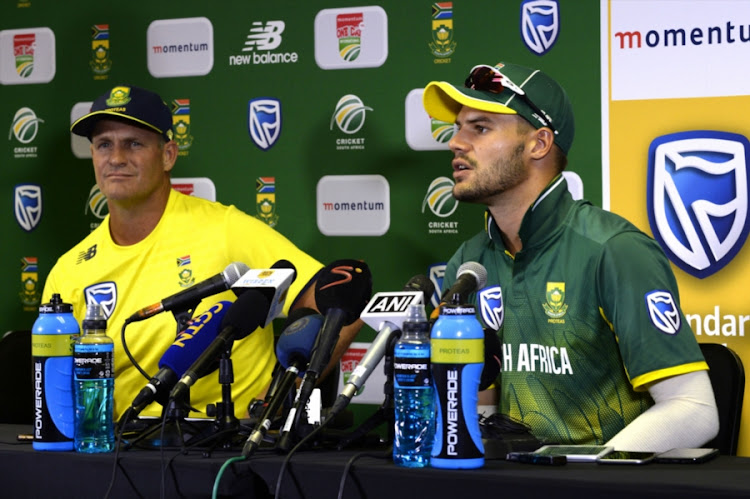 Aiden Markram of the Proteas during the 2nd Momentum ODI match between South Africa and India at SuperSport Park on February 04, 2018 in Pretoria, South Africa.
Image: Lee Warren/Gallo Images

South Africa stand-in captain Aiden Markram put on a brave face after the humiliating nine wickets defeat to India in the second ODI in Centurion on Sunday afternoon and he described the result as a chastening experience.

Markram said his first match as Proteas skipper in the absence of Faf du Plessis‚ who has been ruled out by a finger injury‚ was an eye-opening experience after he found himself on the wrong side of an Indian routing that was influenced by the visitors’ bewildering wrist spin.

“Definitely eye opening‚ but it might just bring the best out of the squad and I am looking to see how the players react‚” Markram said when asked about his run out as the leader of the team.

The Proteas batting line up collapsed under pressure from the rampaging Indian twin spinners Yuzvendra Chahal and Kuldeep Yadav‚ who shared eight wickets to take their total after two games to 13‚ as the visitors took a 2-0 lead in this six match series.

South Africa were handed a heavy and embarrassing nine wickets defeat by India in the second ODI at SuperSport Park in Centurion on Sunday.
Sport
3 years ago

Looking back at the disappointing manner in which they succumbed to man-of-the-match Chahal‚ who ended with career best figures of 5/22‚ and Yadav who ended on 3/20‚ Markram admitted that his batsmen failed to execute their plans.

“I don’t think it was much the lack of a game plan‚" he said.

"If you speak to each and every individual in the top six or seven‚ every one of them has a clear plan.

"It comes down to execution on the day.

"I think we should have executed better‚” he said while insisting that facing slow wrist spinners is not a major problem for them.

“They (Chahal and Yadav) are two quality bowlers in their own right and I don’t think we played them particularly well‚ which was our downfall.

"You are never going to come across a bad bowling attack in international cricket.

"It’s just one of those things that we must work on but it is not a massive danger for us.”

Markam was joined by Dale Benkenstein in the post match press conference and the South African batting coach said they have practiced against wrist spinners in the nets but their challenge has been the quick turnaround between Tests and ODIs.

“We have had very little time‚ unfortunately we moved from the Test series straight into the ODIs‚" Benkenstein said.

Aiden Markram's the ace in the pack

South Africa's "Vision 2019" project took a sharp turn towards the future when Aiden Markram (23) was announced as the stand-in captain for the rest ...
Sport
3 years ago

"I thought we had a very good practice on Friday.

"We had two wrist spinners at our practice sessions but things don’t turn around overnight.

"The problem is that we are not at 50% of our ability with bat and ball and it is our job as the coaching staff to get the best out of them.

"It is not always easy when things are moving from one day to the next.”

Chahal‚ who was with India A during the triangular series against against South Africa and Afghanistan in Pretoria late last year‚ said they bowled to their strengths.

“We are just bowling the way we have been doing in India and to our strengths‚" Chahal said.

"We are reading the wickets very well and that has been a plus for us.

"We bowl slow because the ground is very small and they have big hitters."