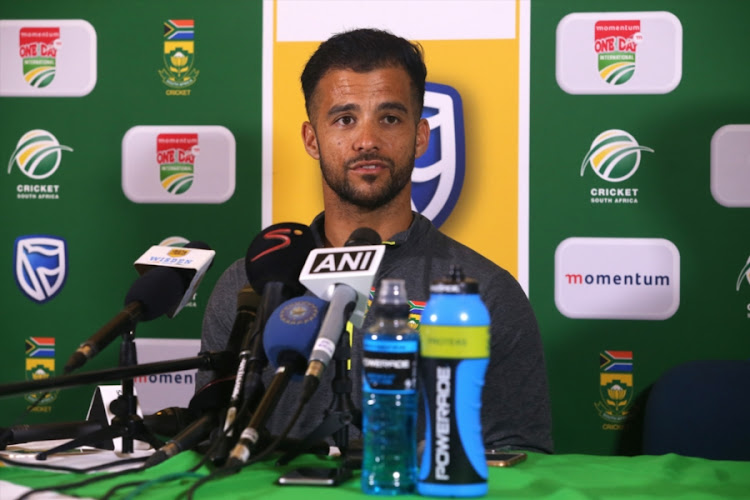 Somebody had to do it. At Newlands on Wednesday‚ after India had crushed South Africa by 124 runs to ensure they can’t lose the one-day series‚ the unlucky somebody who was lumped with explaining that to the press was JP Duminy.

What has earned India’s wrist spinners‚ Yuzvendra Chahal and Kuldeep Yadav‚ 21 of the 27 South Africa wickets that have fallen to bowlers in the series?

Why did South Africa field first after winning the toss on Wednesday considering teams batting first had won 23 of the 29 other day/night ODIs played at Newlands?

Why was Morne Morkel‚ by miles the best among South Africa’s available fast bowlers in ODIs at Newlands‚ left out?

And‚ overarchingly‚ when are South Africa going to get it together well enough to compete‚ nevermind win‚ in the three remaining matches of a six-game rubber in which the best result‚ for them‚ is now a draw?

Duminy didn’t have the answers. No-one does. And he deserved better than to be dragged out to pretend he did.

He had bowled all 10 his overs for the first time since 2013 and was the only South African to take more than one wicket.

But Duminy has been shot in this movie before‚ so he had a go.

On Chahal and Yadav: “What they’ve done really well is assess the conditions in terms of what they need to do; what sort of speed and length they need to bowl.

“They haven’t made it easy for us to get ones.

“Unfortunately a lot of us have not picked their googlies.

“That’s what it has come down to — we’ve not been good enough.

“We have gameplans and they’ve bowled well enough not to give us balls to play in our gameplan.

“We’ve got to come up with different ways of countering how good they’ve been.”

On fielding first on Wednesday‚ the first time South Africa had done so in the series: “India’s always been a good chasing side.

“We went with a different strategy in terms of putting them in in the hope we could counter them.

“Unfortunately it didn’t work out that way.

“When you lose games‚ your strategies look a bit silly.

On Morkel’s omission: “To my mind I thought Morne was rested.

“There was no other reason.”

On the elephant in the room: “I think there can be a plan. Or there should be a plan.

“There’s no doubt that we will reconvene after this game and break down where we are going wrong.

“That’s something we’re going to have to look at and work out where we can be better.

“The series is not lost yet and that should be a big enough motivator for us.

“I think every cricketer has been through this at some point in their career.

“It will take a day or two to get over the loss.

“The more you play the more your realise that ups and downs come with the game.

“If you have a strong culture that’s what you turn to when things are not going well; making sure you don’t isolate yourself from the team‚ that you give to the team rather than taking for yourself.”

As unfair as it was to send Duminy to pick over the bones of the carcass‚ it would have been cruel to put Aiden Markram behind the pointing microphones.

Markram‚ only 23 and with just six tests and three ODIs under his belt‚ had the captaincy thrust on him after Faf du Plessis broke a finger in the first match of the series.

How was the youngster holding up?

“Quite a few guys have helped him out and he has confided in a few guys‚” Duminy said.

“This is the quickest way to learn‚ going through difficult times.

“It’s a not a case of he needs to go through this alone; we’re a team.

“The team hasn’t played well — it’s not that he hasn’t led well.

“As a captain you can only do so much‚ say so much‚ motivate so much.

“We’ve got to stand up and put in those performances that we get paid to do.”

South Africa will try to stand up in the fourth match of the series at the Wanderers on Saturday‚ when they are due to welcome AB de Villiers back from a finger injury.

Maybe he can explain what the hell is going on.

History shook its head in disbelief at Aiden Markram after he won the toss in the third one-day international at Newlands on Wednesday.
Sport
3 years ago

Kagiso Rabada has news for South Africans: “Failure is going to happen.”
Sport
3 years ago

South Africa stand-in captain Aiden Markram put on a brave face after the humiliating nine wickets defeat to India in the second ODI in Centurion on ...
Sport
3 years ago

South Africa were handed a heavy and embarrassing nine wickets defeat by India in the second ODI at SuperSport Park in Centurion on Sunday.
Sport
3 years ago