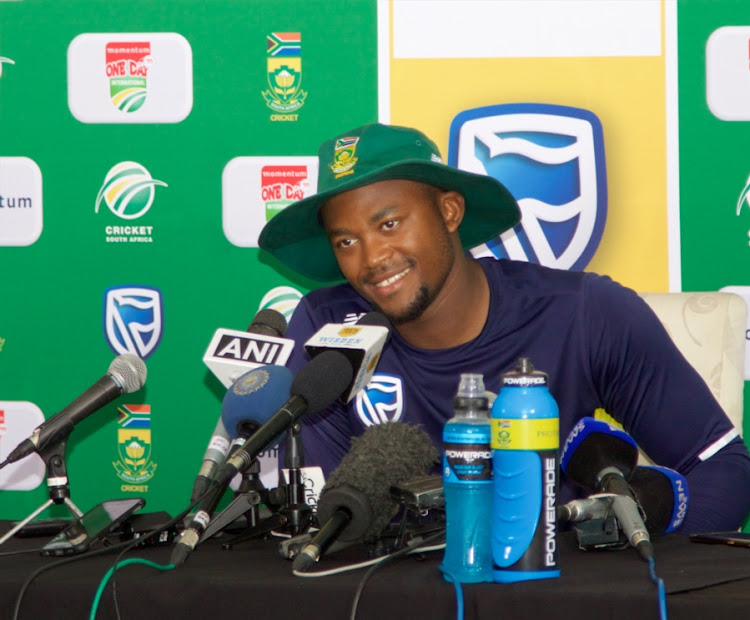 Early Indian wickets will be key for South Africa as they attempt to stay alive in the series when the two sides contest the fifth ODI at St George’s Park in Port Elizabeth on Tuesday.

While the Proteas have been able to keep Rohit Sharma quiet at the top of the innings with only 40 runs in the four matches so far‚ they have not had much success in working Shikhar Dhawan and captain Virat Kohli out.

The Indian duo have been superb throughout the series with Kohli being particularly dominant in scoring 393 runs at average of 196.50 per innings.

South Africa have had their chances against him but so far the Indian skipper has proved to be the difference between the sides and his wicket will be highly sought after.

South Africa allrounder Andile Phehlukwayo says the team has a strategy laid out to effect early dismissals in an attempt to have a go at the Indian middle order which has yet to fire‚ albeit‚ with limited opportunities.

“Obviously they have been batting really well‚" Phehlukwayo said in Port Elizabeth on Monday.

"It will be really nice for us to expose their middle order [early on].

"At the same time we don’t really want to look too far ahead.”

The strapping left-hander was one of the South African heroes at the Wanderers on Saturday as the Proteas kept their hopes of squaring the series alive with a five-wicket victory in a rain-shortened affair.

He clubbed 23 off only five balls as the home team cruised in with 15 balls to spare.

It was a promotion up the order that had him thrust into the limelight and he responded in a brutal and effective manner.

"It was a left-hander for left-hander thing‚ so when David Miller got out‚ I had to go in and keep the combination going. I was told to look to be positive‚ watch the ball and execute my game plans that I have‚” said the 21-year-old.

Up until the fourth ODI‚ the South Africans had struggled to come to terms with the Indian wrist-spinners but an aggressive approach in Johannesburg saw them claim a rare victory over Kuldeep Yadav and Yuzvendra Chahal.

The Proteas will be after more of the same at St George’s Park.

“It was a game plan we had in our change room to be really positive and look to score against them. Here in PE it is obviously home conditions.

"We know the conditions very well and we train specifically for them. The guys know their individual game plans. We know we have to be really positive‚” Phehlukwayo said.

The seamer said the mood in the camp had lifted considerably and 3-1 down they were determined to take the series to the last match in Centurion with a win on Tuesday.

“I think the team has been really positive.

"We have obviously been training really hard. We have good momentum now from this last game. We didn’t think we were too far away from a victory.

"We have been very specific about our training and the team environment is really good.

“The setup is really positive. We have a good fighting spirit and a good culture. It’s never down and out. We always looking to fight back.”

Phehlukwayo said the return of AB de Villiers had had a positive effect on the squad and even though he only scored 26‚ his mere presence had lifted them.

“The vibe that he brings to team and the leadership he brings is fantastic. He teaches us about batting and his contribution he brings is always good.”

Team selection will also be crucial for South Africa and it would not surprise if leg-spinner Imran Tahir is brought back into the starting line-up for a surface that is likely to offer some assistance.

Two weeks ago Proteas wicketkeeper/batsman Heinrich Klaasen could not get tickets for the Pink ODI but as fate would have it‚ he turned out to be the ...
Sport
3 years ago

With a little bit of help from rain and a stupendous partnership of 72 off 42 between David Miller and Heinrich Klaasen, South Africa beat India by ...
Sport
3 years ago

Proteas have undefeated record in Pink ODI to protect

The Bullring in Johannesburg will be fully dressed up in pink on Saturday during the fourth ODI between South Africa and India but focus will also be ...
Sport
3 years ago

Proteas batting mainstay AB de Villiers has been cleared to play in the Pink ODI against India at Wanderers Stadium in Johannesburg on Saturday.
Sport
3 years ago