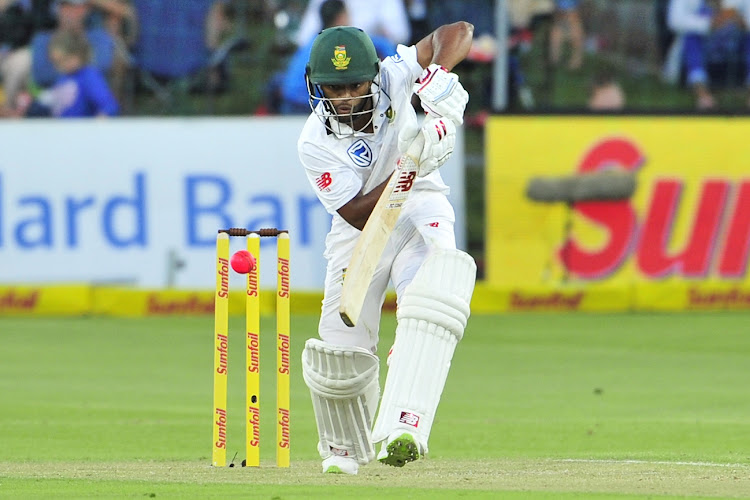 Temba Bavuma of the Proteas during day 1 of the 2017 day-night Sunfoil Test match between South Africa and Zimbabwe at St Georges Park, Port Elizabeth on 26 December 2017.
Image: Deryck Foster/BackpagePix

It's not of his own doing that Temba Bavuma finds himself in the Proteas sidelines but the hand injury he suffered in a domestic 50-over game was terribly timed.

In his absence‚ the likes of Heinrich Klaasen and Khaya Zondo have staked serious middle-order claims in the limited overs series against India.

That ship is just about to sail as the mighty challenge that is Australia is due next month hell-bent on revenge.

Bavuma played a large part in South Africa's recoveries in the 2016 series that ultimately saw them rebound from two difficult positions to win Tests at Perth and Hobart by convincing margins.

That series was South Africa's third in Australia on the trot.

The first of four Tests starts in Durban on March 1 and Bavuma is in a race against time‚ tactics and fitness.

The need for speed means Bavuma is surplus to requirements alongside the fact that AB de Villiers has made his considerable middle-order presence felt.

“Maybe the only thing I could do differently is to bowl 140 but on a serious note‚ it's the team's tactic‚" Bavuma.

"We're starting to go down the route where we feel our bowling attack‚ especially with the kind of personnel we have‚ is our strength.

"I think we're trying to maximise that and I don't think there's much that I can do from my side. I think it's a case of whenever I get the opportunity‚ I have to make it count.

“Playing five seamers against Australia will depend on the wickets we'll be preparing for the series. The Australians have a lot of bowling firepower so that neutralises us from that perspective.

"We were able to do so in Australia on quick wickets so whatever strategy we do go with‚ I do believe we have the skill to adapt to whatever that comes our way.”

The Cape Cobras have a Sunfoil Series fixture against the Dolphins in Pietermaritzburg on March 1‚ a game that could shape Bavuma's summer if he's not in the selection frame for the first Test.

Bavuma hasn't been included in the South Africa "A" squad for the three-day game against Australia that starts on March 22 but that also increases the likelihood of Bavuma being in the Test squad.

After this week's round where the Cobras will be hosting the Highveld Lions in Paarl on Thursday‚ the franchise first-class tournament takes a break until March 1.

“I'd like to play next week just to prove to myself that I am fully fit and able.

"Australia is a big series so you don't want to be going to such a series with any doubts physically.

"You'll already be having doubts mentally because of the injury so you want those to be parked on the side‚” Bavuma said.

“I'll be looking to use next week's Sunfoil Series game to prove my fitness to the powers above.

"I need to prove to the doctors that I'm good.”

The Titans duo of wicketkeeper/batsman Heinrich Klaasen and fast bowler Junior Dala and Warriors batsman Christiaan Jonker have been named as new ...
Sport
3 years ago