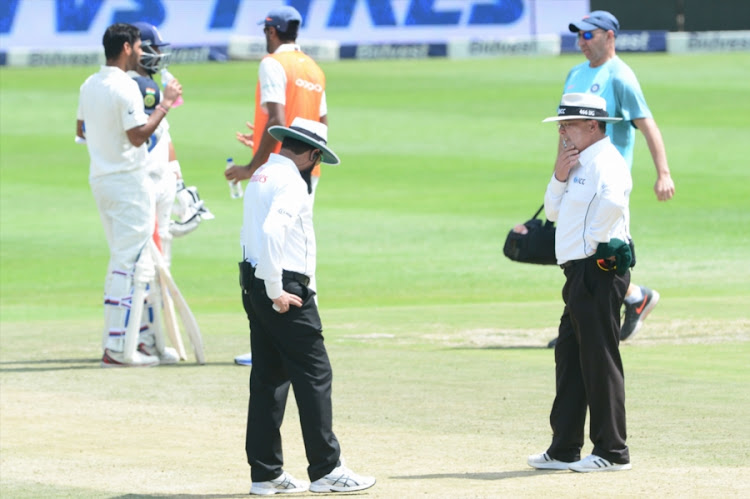 Umpires, Aleem Dar and Ian Gould having a look at the pitch during day 3 of the 3rd Sunfoil Test match between South Africa and India at Bidvest Wanderers Stadium on January 26, 2018 in Johannesburg, South Africa.
Image: Lee Warren/Gallo Images

A meeting of muddied men is key to the outcome of next month’s Test series between South Africa and Australia.

They are Hilbert Smit‚ Cricket South Africa’s (CSA) pitch consultant‚ and the groundsmen at the venues where the four matches will be played‚ who were due to gather last week to look back at last month’s series against India and think ahead to the Australian rubber.

The focus on pitches will be sharper than usual in the wake of the character of those on which South Africa beat India 2-1.

Newlands was spicy — too spicy‚ if you ask it’s creator‚ Evan Flint — Centurion veered towards sub-continental and the Wanderers was deemed dangerous enough for play to be suspended late on the third day.

All of which happened not because the groundsmen wanted to see blood on the pitch‚ but because the home side asked for surfaces more overtly South African in nature than normal.

Except for Centurion‚ they got them.

And if they had not won the series they would have faced stern questions about the importance of being careful about what you wish for.

But‚ as well as India bowled‚ the Australians‚ whose squad bristles with‚ among others‚ Mitchell Starc‚ Josh Hazlewood and Pat Cummins‚ are likely to perform better.

And they will be more at home in South African conditions than the Indians.

So‚ dare the home side try to tilt conditions to that extent again?

“I’m sure‚ for the Aussie tour‚ we won’t kill ourselves to go for sporty pitches‚” Smit said.

“Their team has the same qualities as ours. We going to take them on on proper pitches‚ I suppose.”

The Wanderers will get the chance to redeem itself in the last match of the Australian series‚ and it had better take it — two more demerit points will get it banned from hosting international matches for a year.

The series will move to the Highveld after the third test at Newlands‚ which will be preceded by trips to St George’s Park and Kingsmead.

There is‚ Smit concurred before the groundsmen gaggled‚ much for the muddied men to discuss: “We’ll reflect on what happened and see what to do going forward.

“It’s not an exact science. To leave more grass‚ how much is more? And it can become excessive. Then we get what happened at the Wanderers.

“So do we leave the groundsmen to carry on and do what they want?”

Hell yes: none of the players would put up with a groundsman telling them how to play.

But Smit wasn’t entirely averse to lending the players an ear‚ not least because‚ he says‚ South Africa’s groundsmen need guidance.

“It’s a good idea to a certain point. A groundsman should know what to do and should be an expert.

He wasn’t ready to write off the Indian experiment as a failure.

“We tried something. We’ll review it‚ see how it worked‚ take the positives out of it and learn from the negatives.”

Besides‚ the surfaces saga has raised the profile of cricket’s too often unsung servants‚ without whom — like scorers and umpires — no match would be able to be played.

“If there was a recipe to follow it would be such a boring game‚” Smit said.

“What would there have been to talk about? “It’s a pity that we’re caught in the middle of it‚ but that’s also maar part of life.”