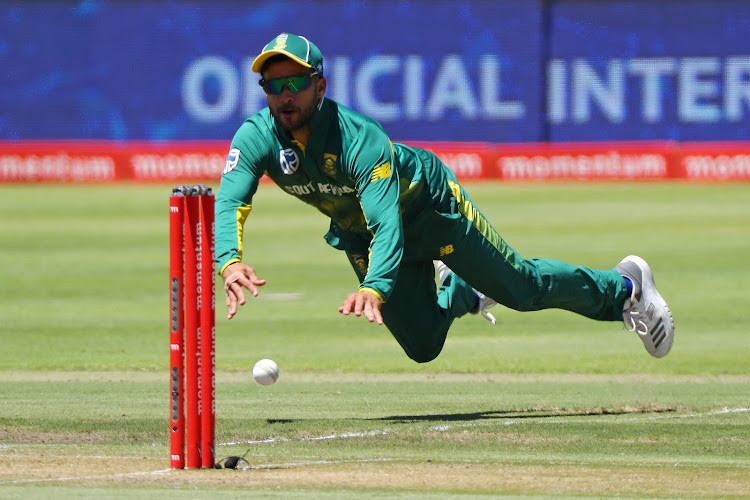 South Africa have their back against the wall and must win the second of three T20 matches against India at SuperSport Park on Wednesday if they are to avoid losing the series against the visitors.

After losing the first match by 28 runs at the Wanderers on Sunday‚ the South Africans must produce an all-round improved performance to tie the series at 1-1 and make the final encounter in Cape Town on Saturday the decider.

For the Proteas to prevail against an on-form Indian side that is enjoying a good run of form‚ the batting‚ bowling and fielding must improve and stand-in captain JP Duminy admitted as much after the loss in Johannesburg.

Reeza Hendricks (70) and Farhaan Behardien (39)‚ who combined for the fourth wicket partnership of 81‚ were the only Proteas batters who made notable scores in their unsuccessful chase of 204 - five other batsmen failed to reach double figures.

“They (Hendricks and Behardien) gave us a chance in the game‚" Duminy said.

"With wickets in hand you give yourself a chance to win the game but unfortunately in the ideal world you could have liked to have extended that partnership.

"When you look at the situation of the game‚ we were looking at about 14 runs an over and they needed to up the ante to take the game forward.

"I was happy to see how Reeza performed under pressure which was exceptional.

"Those are the kinds of positives that we take out of this match and we can take this into the next match.

“From a batting perspective‚ that has been our Achilles heel throughout this Indian tour from a short format point of view.

"As senior players and batters‚ we have to take responsibility for that‚ we have to look at ourselves in the mirror and say how can we improve and become better.”

With ball in hand‚ Proteas never fully recovered after India managed a flying start to score 78 runs in the powerplay including three maximums and four boundaries where the opposition exploited the bowlers’ ploy of bowling short balls upfront.

“The bowlers executed their plans very well‚ our plans might have been slightly different and where we came short was about assessing the conditions as quickly as possible‚" Duminy said.

"India are very simple and it works for them very well.

"We are trying to find something that will work for us but we are moving in the right direction in terms of execution.

"The plan was always to try and take wickets‚ the mindset was an aggressive one but you are bound to leak runs with that kind of mindset."

Improvements are also needed on the field as Behardien disappointed by dropping Suresh Raina and Virat Kohli with his Titans team-mate Tabraiz Shamsi putting down Manish Pandey from what looked like routine catches.

“We tried and unfortunately there were a few missed opportunities throughout the game but we will definitely come back stronger in the next game and I believe that.

"I honestly don’t believe that we are dropping our heads and our body language is bad.

"I honestly believe that we were good on the field today bar the missed opportunities.”

If the Gupta Brothers wanted to go undetected on a balmy Sunday afternoon in Jozi‚ all they needed to do was stroll down Corlett Drive and sweet talk ...
Sport
3 years ago

South Africa’s fragility was once again exposed as they failed to chase the par target of 204 they were set by India in the first T20 international ...
Sport
3 years ago

Proteas T20 stand-in captain JP Duminy says the best way to deal with rampant Indian skipper Virat Kohli is not to try to contain him but to take the ...
Sport
3 years ago