Australia's fast bowlers make their statement of intent in Benoni 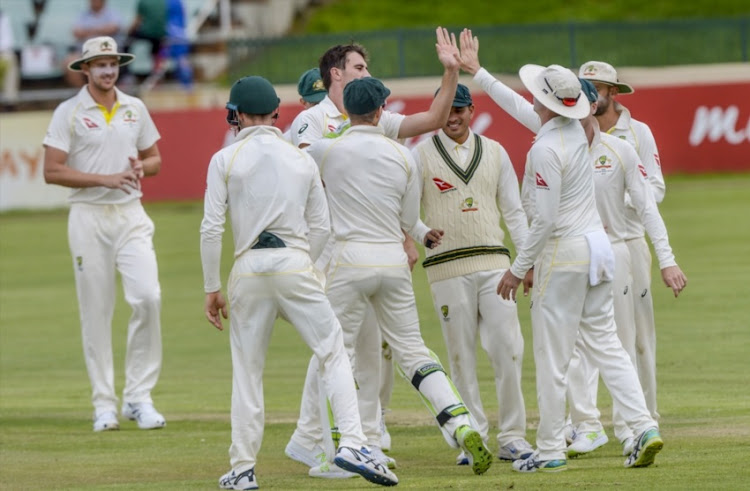 Pat Cummins of Australia celebrates after dismissing Senuran Muthusamy of South Africa during day 1 of the Tour match between South Africa A and Australia at Sahara Park Willowmoore on February 22, 2018 in Johannesburg.
Image: Sydney Seshibedi/Gallo Images

The aim was for South Africa A to make Australia uncomfortable‚ but the visitors' fast bowlers made their statement of intent in Benoni on Thursday.

While they didn't exactly run roughshod over South Africa A‚ Pat Cummins (4/32) and Josh Hazlewood (3/40) ensured that Australia had some batting time on day one.

Usman Khawaja (22)‚ Peter Handscomb (0) and Steven Smith (23) were the batsmen who couldn't get to stump.

Khawaja and Handscomb fell to injudicious shots off Duanne Olivier while the captain was out-thought by Malusi Siboto.

However‚ the sparse stage on an unseasonably chilly and cloudy summers day in the East Rand belonged to the Australian pace trio.

Having last taken part in a first-class match in early January in the fifth Ashes test against England in Sydney‚ Cummins‚ Hazlewood and Mitchell Starc bowled a combined 37 overs to get themselves into decent bowling shape for next week's first test in Durban.

The disappointing part about South Africa A's knock were the starts that weren't converted.

Except for De Bruyn‚ who was wrongly dismissed off a Hazlewood short ball that came off his shoulder‚ the rest threw their wickets away.

Muthusamy's wicket on the stroke of tea was perhaps the most galling of them all as the Dolphins left-hander had seen off all the threats before he decided to waft at a loose Mitchell Marsh delivery.

Tim Paine gleefully snaffled the catch to leave the hosts teetering at 203/6.

The last four wickets could only raise a paltry 17 runs.

Having lost an Pieter Malan early to Cummins‚ Hamza and De Bruyn fashioned a sparkling 82-run second wicket stand that should have extended beyond lunch if it wasn't for De Bruyn's dismissal.

The Knights captain batted with thinly-veiled intent with 36 of his runs coming in boundaries.

With the Test squad due for announcement during the course of the game‚ this was the perfect opportunity for him to remind the selectors as to why he needs to be given a chance.

The Australians weren't scared to pitch it up as swing was available but De Bruyn was equal to the task.

Hamza held them at bay until he disappeared shortly after lunch to leave the hosts struggling at 108/3.

Captain Khaya Zondo (three) didn't make much of an impression but a 44-run fifth wicket partnership between Mulder and Muthusamy steadied the ship.

This duo fell six balls of each other‚ exposing the brittle tail that faltered quickly.