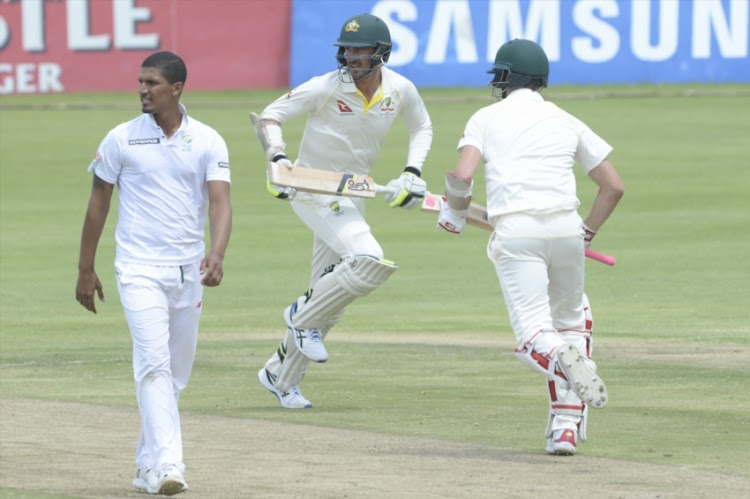 Pat Cummins of Australia during day 2 of the Tour match between South Africa A and Australia at Sahara Park Willowmoore on February 23, 2018 in Benoni.
Image: Lee Warren/Gallo Images

Patrick Cummins's unbeaten 50 and Beuran Hendricks's five-wicket haul were the highlights of what was a keenly contested second day of the warm-up game between South Africa A and Australia.

After finding themselves perilously close to conceding a first innings lead when they tottered to 178/7, the Cummins-inspired tail-end rearguard pushed Australia to 329 in reply to South Africa A's first innings 220.

The players were yanked off the field 25 minutes before the end of play because of bad light with South Africa A trailing by 54 runs.

The clouds refused to lift at any point in the day but Cummins's disciplined, unbeaten 95-ball 56 led the way.

It remains the only half-century of the game and an important one from Australia's perspective.

Cummins was Australia's most improved batsman during the Ashes and his 166 lower-order runs often halted collapses.

In an upcoming series where two evenly matched sides find themselves carrying talented but at times off-colour batting units, lower-order runs will be a crucial determinant.

It was Cummins's second first-class 50 and based on his displayed, there will be many more to come from the Australian number eight.

On another unseasonably chilly summer's day where Australia's top order batting was unexpectedly found wanting, the tailenders showed them how it should be done.

Their 64-run, ninth wicket stand was further improved upon by a 40-run last wicket alliance between Cummins and Josh Hazlewood (26).

The last two wickets raised an even 100 runs even though Hendricks' diligence earned him his 14th first-class five-wicket haul.

Resuming from their overnight 87/3, Shaun Marsh (25) and Cameron Bancroft put together a 60-run fourth wicket partnership. Hendricks ended that alliance when he coerced a first slip catch from Marsh to Theunis de Bruyn.

Bancroft's unpretty but crucial three-hour vigil was ended by another incorrect decision from umpire Phillip Vosloo.

Bancroft was strangled down the leg-side by Hendricks but didn't edge the ball to Rudi Second. His reaction when given out said it all.

Bancroft needed the time in the middle after his Ashes series fizzled out from his great start in the first test in Brisbane.

After his unbeaten 82 in the 10-wicket win at the Gabba, Bancroft only managed a further 97 runs from a further seven innings to average 25.57.

Tim Paine (22) and Mitchell Marsh (28) steered the visitors safely to lunch at 165/5 but were trapped in front by Malusi Siboto (2/56) and Hendricks respectively.

The tail-end pockets of resistance began with the 47-run eighth wicket partnership between Mitchell Starc and Cummins before Lyon and Hazlewood displayed the necessary discipline to frustrate the hosts.