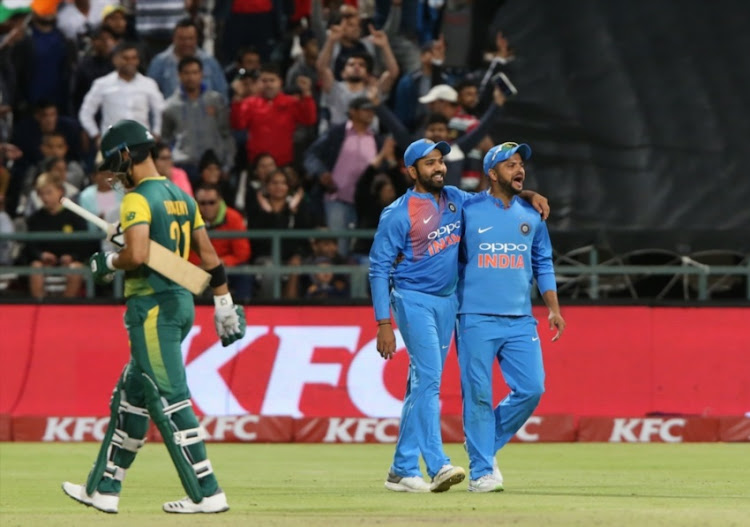 India will leave South Africa on a high after clinching the T20 series at Newlands on Saturday.

The Indians won the third match of the rubber by seven runs to earn the honours 2-1.
India, who were without star batsman and captain Virat Kohli because of a back injury, were limited to 172/2.

But that proved enough to contain the South Africans, who replied with 165/6.

The home side pulled things back well after they separated Shikhar Dhawan and Suresh Raina in the 10th over.

India’s second-wicket pair rattled up 65 runs and looked like putting India within striking range of 200 in the 50 balls they spent at the crease together.

But left-arm wrist spinner Tabraiz Shamsi found a way through when he had Raina caught on the long-on boundary for 43, which India’s No. 3 clipped off 27 balls.

Dhawan stayed until the 16th over for his more measured 47, which ended when Junior Dala ran him out with a stunning direct hit from deep midwicket.

Four of India’s remaining batsmen reached double figures but only Hardik Pandya made it to 20, and only just — he scored 21.

India had surged to 100 off only 74 balls but they scored only 47 runs in their last five overs.

They were effectively pinned down between the 14th and 17th overs, which were bowled by Dala, Andile Phehlukwayo and Shamsi and yielded a relatively lean 25 runs.

Dala led the fightback with his haul of 3/35.

Having earned the chance to fight for victory, South Africa proceeded to squander it with listless batting.

JP Duminy, whose 55 was his second half-century in as many innings, looked in the mood to win the match.

So did Christiaan Jonker, whose late blast of 49 off 24 balls made for a fine debut.

Jonker and Farhaan Behardien, who was 15 not out, smashed 51 runs off 21 balls for the sixth wicket.

But the rest of South Africa’s batsmen, bar perhaps David Miller, who opened the batting for the first time in his 51 innings in the format and scored 24, were dead in the water.