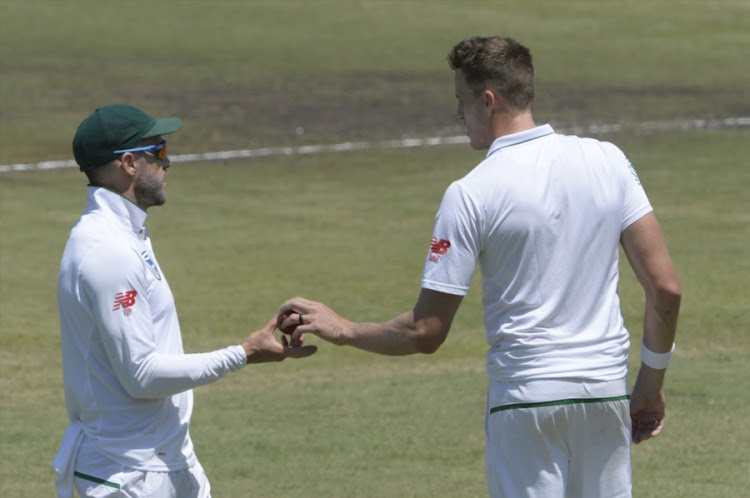 Morne Morkel was a storm in a port in the moments after he bowled the third delivery of the first test at Kingsmead on Thursday.

The ball hit Cameron Bancroft high on the pads. Too high‚ surely.

Both times Morkel unfurled his albatross wings to their fullest extent‚ serrated fingers fluttering for added emphasis. Both times his feet seemed planted as wide apart as the outer edges of the N3 that leads from Durban to Pietermaritzburg. Both times his throat bulged and his eyes burned with undiluted gees.

What was Faf du Plessis to do but send the decision upstairs‚ where it was revealed that the ball had indeed hit Bancroft too high for him to be given out leg-before.

Another question should have been sent upstairs: was Morne Morkel pissed off?

If he was it had only taken him 12 years‚ 83 tests and three balls to get there.

That’s not surprising for a bowler who would have spent many of those 83 tests wondering if it would be his last.

Morkel has taken or shared the new ball only one more time than he has bowled first change. He’s no-one’s idea of a third seamer‚ even at test level.

Except when the first two seamers are Makhaya Ntini and Dale Steyn. Or Steyn and Vernon Philander. Or Philander and Kagiso Rabada.

Worries of job security are only natural when you bowl behind and between that lot. But on Monday Morkel handed in his notice when he announced that he would retire after the series against Australia. He will soon be out of there on his own terms.

“That’s good news for a lot of batsmen around the world‚” Steve Waugh said. Yes‚ Steve Waugh‚ who never faced Morkel and didn’t need to to understand how dangerous he is.

Being 1.96 metres tall will help do that for you. So will being able to crank it up to‚ and above and beyond‚ 140 kilometres an hour more often than not.

That makes you nasty to face‚ as many batsmen have attested‚ even those who face him in the nets. But it doesn’t make you nasty.

Morkel couldn’t be nasty if he tried. He’s a damn near two-metre tall Christmas card‚ a long stretch of nice guy‚ a pacifist amid the pirates.

All that was true about that in the moments after he bowled the third delivery of the first test at Kingsmead on Thursday was that he was still 1.96 metres tall.

He crossed Dharmasena off his Christmas card list as he stood there bellowing his belligerence. He was nothing like nice.

After 12 tests‚ 83 tests and three balls‚ Morkel no longer needed to behave as if he should be grateful for the opportunity to breathe the same air as Ntini‚ Steyn‚ Philander and Rabada.

He was Morne Morkel‚ in some ways better than them‚ in others not quite‚ and he was free at last to be as pissed off as he liked and bugger who noticed.

At who or what? Who can say‚ but that didn’t matter.

Vernon Philander snared the key wicket of David Warner on the stroke of lunch to earn his team a share of the first session spoils.
Sport
4 years ago

Depending on which side of the fence you're on‚ Proteas captain Faf du Plessis has had the pleasure or misfortune of dealing with two of the world's ...
Sport
4 years ago

Heinrich Strydom’s desk was down there somewhere on Wednesday‚ under the lever arch files and the A4 pages and whatever else complicates an ...
Sport
4 years ago