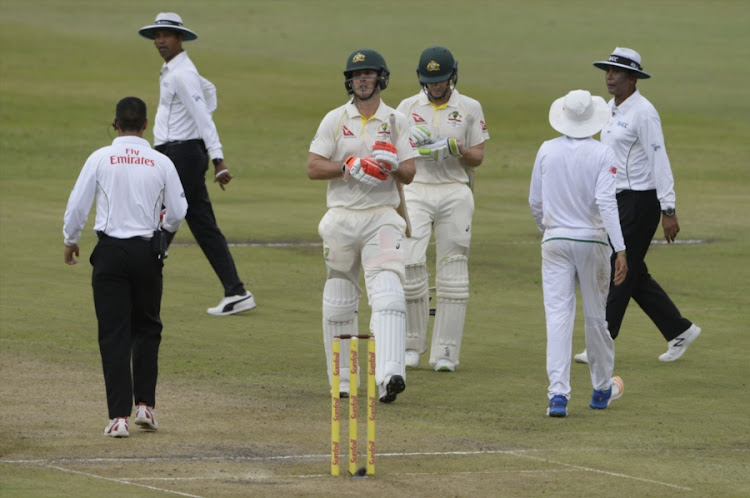 Mitchell Marsh of Australia walks off the pitch along with his batting partner Tim Paine after bad light stopped play during day 1 of the 1st Sunfoil Test match against South Africa at Sahara Stadium Kingsmead on March 01, 2018 in Durban, South Africa.
Image: Lee Warren/Gallo Images

Like death and taxes‚ the certainty of bad light terminating play in a test match in Durban lingers like a vile odour.

In that event‚ deteriorating light scuppered what was an evenly-contested first day of the first test between South Africa and Australia with an hour remaining.

Play was called off for the day 50 minutes before the scheduled end.

The visitors‚ who won the toss and made first use of a slow surface with consistent bounce‚ ended the day on 225/5 after 76 overs.

When an unchanged Australian outfit threatened to pull away‚ they were reeled in by the hosts.

Mitchell Marsh (32*) and Tim Paine (21*) guided Steve Smith's side into the relatively safe position with an unbeaten 48-run partnership before they were hauled off by the match officials.

Unconverted starts littered the Australian scorecard on a seesawing day.

They were reduced to 39/2 after 12 overs before counterattacking half-centuries from Smith (56) and David Warner (51) led the Baggy Greens to the safety of 95/3 at lunch after a 56-run stand for the third wicket.

While Warner lost his wicket to Vernon Philander (2/36) on the stroke of lunch‚ opener Cameron Bancroft (five) and Usman Khawaja (14) feathered catches to Quinton de Kock.

Smith took the attack to the Proteas‚ creaming 11 boundaries but became constrained after AB de Villiers gave him a life on 47.

He perished nine runs later when his edge from an attempted squared cut bounced off De Kock's gloves and into De Villiers's hands at first slip.

Shaun Marsh (40) batted well but was outfoxed by a Keshav Maharaj arm-ball and guided the ball to De Villiers at first slip.

Marsh had shared a 56-run fifth-wicket partnership with Smith before Maharaj got to work on his first test at his home ground.

The left-arm spinner (2/69) bowled the bulk of the overs (24) in a four-man attack that needed a lengthened batting lineup necessitated by Australia's strong bowling attack and De Kock's poor form.

Vernon Philander snared the key wicket of David Warner on the stroke of lunch to earn his team a share of the first session spoils.
Sport
3 years ago

Depending on which side of the fence you're on‚ Proteas captain Faf du Plessis has had the pleasure or misfortune of dealing with two of the world's ...
Sport
3 years ago