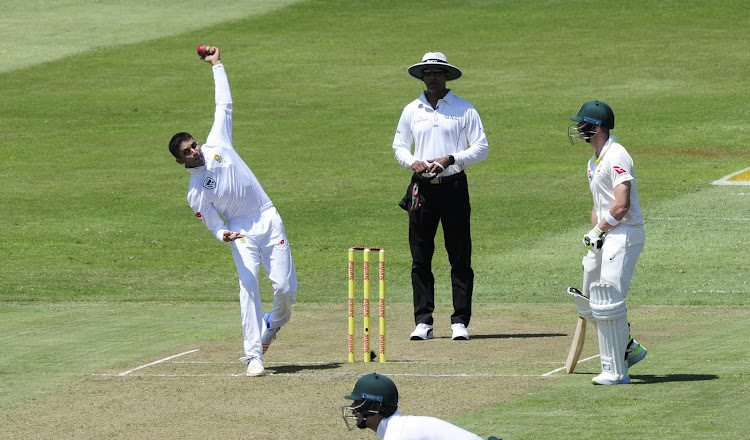 The visitors ended the afternoon session on 170/4 in 56 overs even though they punched boundaries with alarming regularity.

112 of Australia's runs came in boundaries but Smith's loss was a significant one in the context of Australia trying to run away with the game.

The captain looked ominous and the Proteas looked to be running out of ideas in terms of prising him from the crease.

Smith (56) was the ringleader with 11 fours even though his 50 came off 94 balls. The Proteas resorted to bowling dry and it worked.

Australia's run-rate‚ which hovered at around 3.9 per over but it was pulled back to an even three by the end of the session.

Alongside Smith's crucial scalp‚ it was a job well done as Australia threatened to take the game by the scruff of the neck.

Smith had a life on 47 when AB de Villiers shelled a tough chance at slip off Vernon Philander. Such chances have to be taken considering the quality of Smith but he added only nine to his score. In his attempted to square cut Maharaj‚ the ball lobbed to De Villiers at first slip via Quinton de Kock's gloves.

The fact the Australian captain didn't convert represents a failure for him if his score is measured up against his career average (63.57)

His dismissal left the run-making onus on the Marsh brothers‚ Shaun (34) and Mitchell (eight)‚ to guide the visitors to tea.

There's also a school of thought that Australia's batting unit is over-reliant on David Warner and Smith to provide the bulk of the runs.

The brothers have the rest of the day to dispel that line of thinking.

Shaun was unbothered for the better part of his innings but was discomforted by Morne Morkel's short balls while the ever improving Mitchell was solid in attack and defence.

While Australia's tail wagged vigorously during the Ashes series‚ they'll have a different set of questions they'll need to answer against South Africa's bowling attack.

The attack bounced back well after the mauling at Smith's hands but the Marsh brothers remain the clear and present threat.

Vernon Philander snared the key wicket of David Warner on the stroke of lunch to earn his team a share of the first session spoils.
Sport
3 years ago

Depending on which side of the fence you're on‚ Proteas captain Faf du Plessis has had the pleasure or misfortune of dealing with two of the world's ...
Sport
3 years ago

Proteas captain Faf du Plessis says the team needs to make a serious statement of intent in the first Test if they want to shake off their Australian ...
Sport
3 years ago