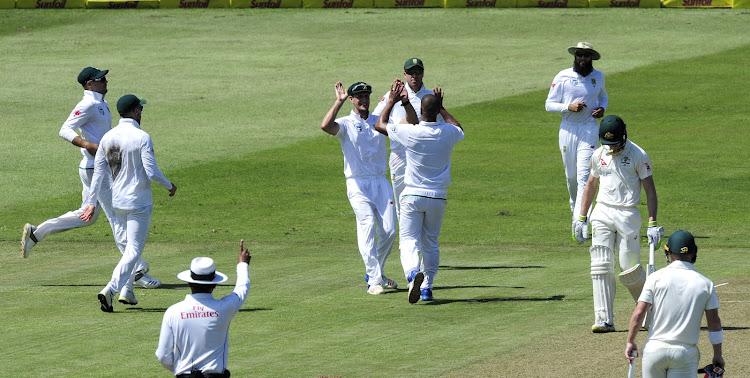 Vernon Philander of South Africa gets congratulated for his wicket during day 1 of the first test between South Africa and Australia at Kingsmead Cricket Ground in Durban on 1 March 2018.
Image: Gerhard Duraan/BackpagePix

Vernon Philander snared the key wicket of David Warner on the stroke of lunch to earn his team a share of the first session spoils.

With the last ball before the interval‚ Warner (51) gave up a decent start to leave Australia at a delicate 95/3 after 27 overs.

It was an important wicket in the context of the match.

The stocky southpaw loves batting in South Africa and looked untroubled for the better part of his innings.

His 28th Test half century was compiled off 72 balls with six fours as the opener salvaged his team after they slipped to 39/2 in 12 overs.

Warner though had a leg-before scare when Keshav Maharaj's first ball at his home ground pinned him in front but umpired Kumar Dharmasena correctly ruled him not-out.

The review proved him right as South Africa lost both reviews after Morne Morkel wasted an earlier review on Cameron Bancroft.

It was a good toss to lose but being the conservative captain‚ there was no way Steven Smith would have preferred to bat last.

The current heat in Durban and the fact Keshav Maharaj was introduced in the 10th over reinforced Smith's decision to bat first on winning the toss.

While him and Warner proceeded serenely to the interval‚ batting will become progressively difficult and what is a good total will only remain to be seen once both team have batted.

However‚ the chinks in Australia's top-order still remain as Cameron Bancroft (five) and Usman Khawaja (14) perished to Philander and Kagiso Rabada (1/26) respectively.

Bancroft had his mind and feet scrambled by Philander's movement and accuracy outside off-stump.

The ball he got out could have been left alone but Philander's nagging persistency meant Bancroft‚ whose form has rapidly deteriorated after his breakthrough debut against England in the first Ashes Test in Brisbane in November last year‚ has become a liability for the visitors.

However‚ Peter Handscomb's equally poor form means Bancroft could be persisted with for another Test match.

When Rabada found the outside edge of his bat‚ Quinton de Kock flung himself to his left to take an outstanding one-handed catch that belied his poor batting form.

At least he still provides surety in his core wicket-keeping role as South Africa had to include Theunis de Bruyn as the seventh specialist batsman as insurance.

Australia had an unchanged side.

Depending on which side of the fence you're on‚ Proteas captain Faf du Plessis has had the pleasure or misfortune of dealing with two of the world's ...
Sport
4 years ago

Heinrich Strydom’s desk was down there somewhere on Wednesday‚ under the lever arch files and the A4 pages and whatever else complicates an ...
Sport
4 years ago

Proteas captain Faf du Plessis says the team needs to make a serious statement of intent in the first Test if they want to shake off their Australian ...
Sport
4 years ago