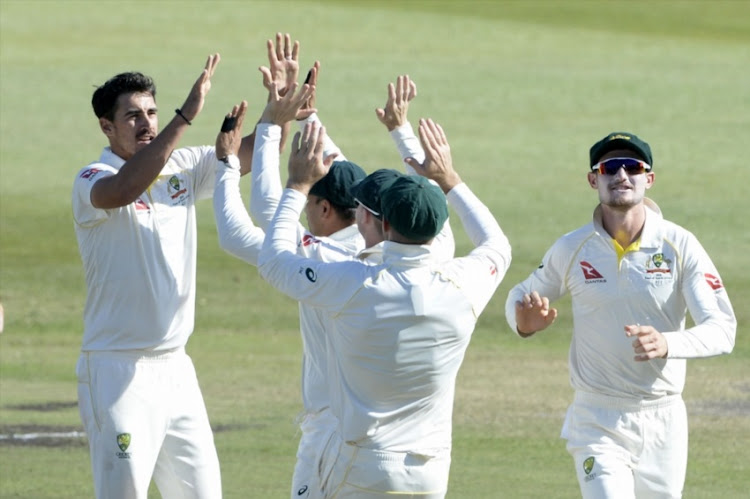 Mitchell Starc of Australia celebrates the wicket of Faf du Plessis of the Proteas with his team mates during day 2 of the 1st Sunfoil Test match between South Africa and Australia at Sahara Stadium Kingsmead on March 02, 2018 in Durban.
Image: Lee Warren/Gallo Images

Nathan Lyon and Pat Cummins ripped the heart out of South Africa's top order to put Australia in the driving seat at tea on the second day of the first test at Kingsmead.

Lyon‚ who came on in the eighth over‚ coaxed a leading edge return catch from Dean Elgar (seven) and had Hashim Amla (nought) caught at forward short-leg to leave the hosts reeling at 27/2.

The present (AB De Villiers) and the future (Aiden Markram) tried to steady the ship but Cummins had the latter caught at forward short-leg to leave South Africa reeling at 55/3.

Markram's wicket could be match-changing as the young opener was calm‚ composed and made run-scoring look easy.

However‚ Cummins's short ball tucked him up and he gifted Cameron Bancroft his second and easier catch.

With the follow-on mark being 151 after Australia scored 351 in their first dig‚ chipping away at the current 296-run deficit is South Africa's first objective. How they go about doing this in the evening session will determine the course of the test match.

With Australia's howitzer bowling attack‚ it's not going to be easy and Australia's slowest and best bowler made the task tougher.

Steven Smith's side had Mitchell Marsh to thank for their decent position. His 173-ball knock deserved the four runs he was looking for when he picked out Morne Morkel at mid-on off Vernon Philander.

He marshalled the lower order with aplomb and was the chief reason why Australia's last five wickets added 174.

They scored three runs less than the main batsmen but batted with more assurance and fluency on slow but true surface.

It was an impressive effort and further indication of Marsh's growing maturity as a batting all-rounder. It's still early in the series but Australia know their lower order can and will bail out the top-order.

After losing his namesake Mitchell Starc on the stroke of lunch‚ Marsh took it upon himself to stretch the lead before his dismissal.

Lyon hit two lusty boundaries before picking out Theunis de Bruyn off the persevering and excellent Maharaj (5/123) to end the innings. He wasn't done and to South Africa's detriment‚ he could prove to be the game breaker.

South Africa will have summon up some serious resolve from their Affies products De Villiers (16*) and Faf du Plessis if they are to make a serious game out of this contest.