Too many questions the Proteas' batting lineup are failing to answer 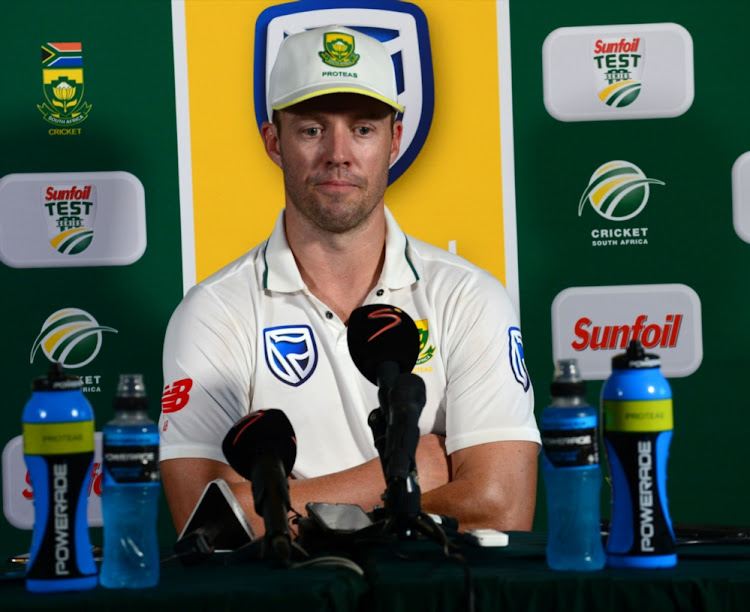 AB de Villiers of the Proteas during day 2 of the 1st Sunfoil Test match between South Africa and Australia at Sahara Stadium Kingsmead on March 02, 2018 in Durban.
Image: Lee Warren/Gallo Images

AB de Villiers has a swanky bat sponsor that's clearly reserved for some the best players in the world. It's a brand new one Sachin Tendulkar made famous before Virat Kohli took up that mantle.

Friday was the day for him to show the ball the makers' name and he did but the treasured test match 100 continues to elude him.

It's 23 innings in just over three years since De Villiers thrilled with three figures but mitigation is provided by the fact he had some time out of the game.

The 148 against the West Indies at Newlands is something his previous bat sponsor‚ yes‚ that Australian one with the noisy bird that Ricky Ponting continuously tormented South African bowlers with‚ can harp on about.

Mitchell Starc produced reverse swing of the highest order to bowl South Africa out for 162 at the end of the second day.
Sport
3 years ago

A score of 71 not out in De Villiers's context would be termed as a failure‚ but failure was around all round him as Australia's lower-order outscored the entire South African batting unit with a boxing score (174-162) that would have flattered a challenger.

South Africa weren't out-pointed‚ they were socked on the chin with every third punch. As the game progressed‚ it proved to be a glass one.

Mitchell Starc's rapid five-punch flurry ensured they wouldn't get up from the dusty Kingsmead surface.

This was De Villiers's fourth 50-plus score since his return against Zimbabwe on Boxing Day and one that promised so much.

It wasn't his fault that it delivered so little but it only served to highlight South Africa's batting deficiencies.

If you’re watching coverage of the Kingsmead test between South Africa and Australia and you hear someone say, “G’day ya cunning bastards,” do not ...
Sport
3 years ago

It goes without saying that South Africa's test 100s against the big teams have gone missing in action. The six innings against India didn't produce one.

You have to go back to Oval test against England where Dean Elgar's 136 only served to cushion what became a heavy 239-run defeat.

Not even the insurance of Theunis de Bruyn as the extra batsman in the shift from the six/five to the seven/four batting and bowling arrangement could save the hosts from Starc's white-hot reverse swing that seared South Africa's now apparently fragile middle order.

It was fully understandable as to why De Villiers couldn't understand why his teammates couldn't decode the hooping movement.

Then again‚ it's only a batsman of his temperament and skill who can make batting look easy while the sink without a trace while batting on the same pitch.

“My plans were pretty simple against Starc. He was swinging the ball one way and I felt I had the ball covered. He bowled a couple of good deliveries but swing is one thing because the ball was moving off the deck. It was difficult to cover that so credit to him for bowling well. I'm not sure what I did differently to the other guys‚” De Villiers said.

“There were a couple of softies today but there was some very good bowling. They had a good intensity about them and they seemed to be clear with their plans. We could feel as a batting unit that they knew what they were doing.

Nathan Lyon and Pat Cummins ripped the heart out of South Africa's top order to put Australia in the driving seat at tea on the second day of the ...
Sport
3 years ago

“It's not all lost. Some guys did look good and it was really close to a couple of good partnerships. We just didn't cross that line because when you do so with two batters out there‚ things change very quickly.”

Make no mistake‚ there are questions that South Africa's batting are failing to answer and that's happening with alarming regularity.

It would have been easy to look at the second innings implosion in the second test against India in Cape Town and the third test in Johannesburg.

While Newlands wasn't quite the minefield‚ even though unexpected but welcome rain freshened the surface‚ the Wanderers minefield served up a preliminary examination of what was to come against Australia.

A post-tea collapse of 7/107 in 32.5 overs provided the uncomfortable answers and the glaring question about South Africa's ability in terms of handling high quality pace.

There's still a possible seven innings that remain for South Africa to dispel that notion but no compelling evidence was brought forward to enhance their argument.