What to do about a magnificent problem called Kagiso Rabada 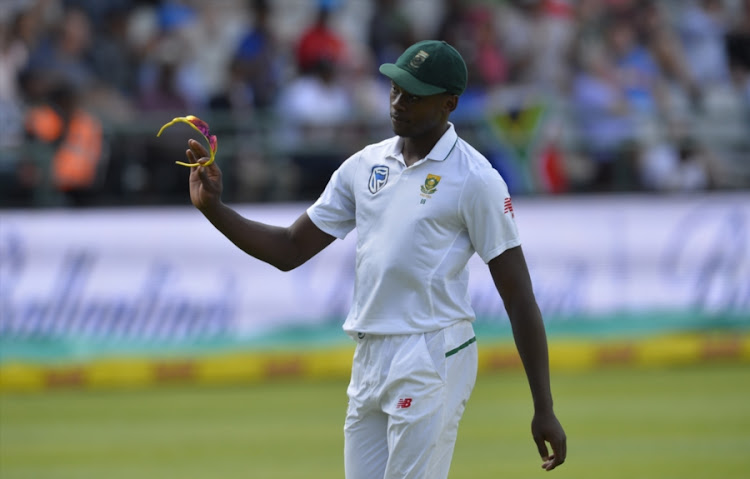 What would Wakanda do about a richly talented‚ finely skilled‚ hot-headed problem called Kagiso Rabada?

Ask Queen Divine Justice to sort him out?

Send him to the Wakandan School for Alternative Studies to grow the hell up? Sit him down with the Black Panther himself for a stern talking to?

The kids from Greenwood Primary‚ a wonderfully woke bunch‚ yelled their own answer to the question en masse from their perch high in the stands at St George’s Park on Monday.

Out on the field Rabada was busy completing his match haul of 11/150‚ the overriding reason why South Africa won the second test against Australia by six wickets to level the series.

Rabada’s figures were the best by a fast bowler for South Africa in a test against the Aussies.

He has now claimed four 10-wicket hauls: one more than Allan Donald‚ as many as Makhaya Ntini and one fewer than Dale Steyn.

It’s early days yet in Rabada’s career but in all the 2 298 tests played‚ only Sydney Barnes‚ Clarrie Grimmett and Muttiah Muralitharan have taken a higher percentage of 10-fers measured against matches played.

If you’re happy to call Barnes‚ a pioneering purveyor of fast off and leg breaks‚ a spinner‚ that makes Rabada potentially the greatest fast bowler in the history of the game.

As Faf du Plessis told a press conference‚ “He’s the best strike bowler‚ I think‚ in the world at the moment.”

But that doesn’t matter to the International Cricket Council (ICC) and it’s demerit system.

On Monday‚ two-and-a-half hours after his teammates stood back and applauded him off the field for his feat‚ Rabada became the first player to be banned for two matches since the system came into operation in September 2016.

He was done for colliding with Steve Smith after he dismissed Australia’s captain on Friday.

“[Rabada] had the opportunity to avoid the contact‚ and I could not see any evidence to support the argument that the contact was accidental‚” an ICC release quoted match referee Jeff Crowe as saying.

That earned Rabada a fine and three demerit points. He copped another point for his verbal send-off of David Warner on Sunday.

An accumulation of eight points triggers a two-match ban. Rabada had taken five into the game.

He is out of the third test at Newlands on March 22 and the last match of the series at the Wanderers eight days later.

But he is consulting lawyers and an appeal‚ which would have to be lodged no later than 48 hours after the sentence was handed down‚ could be forthcoming.

If a challenge is lodged‚ South Africa team management said‚ Rabada “will still be suspended unless the judicial commissioner is appointed early and hears an argument to allow him to still compete whilst the hearing is being sorted out”.

But the odds on him playing in Cape Town are about as long as him feeling better about things because Mitchell Marsh lost 20% of his match fee and gained a demerit point for swearing after he was dismissed by Rabada on Monday.

“If you look at the way ‘KG’ plays the game‚ he’s a competitive fast bowler and he works bloody hard‚” Du Plessis said.

“He runs in and he bowls quick for long periods of time. And when he gets big wickets that’s celebration‚ that’s energy‚ that’s passion.”

Du Plessis spoke of the need for the regulations to be applied consistently‚ and for common sense to trump all.

“You [should] look at the situation in context and then you [should] make a decision on what you see‚ not what the rule book says.”

Nevermind all that: what the hell was Rabada thinking?

“It’s a big series‚ there’s a lot to play for. There’s a whole lot of emotion and pride.”

“There’s a whole lot that you’re playing for.”

“There’s a lot of grey areas‚ but the rules are rules. The reason why we went for a hearing [on the Smith charge] was because we believe there’s not a lot of consistency.

“If I knew I did it deliberately I wouldn’t have gone to contest it. I didn’t even feel contact in that moment because I was so pumped up.

“It’s going have to stop. I cant keep doing this because I’m letting the team down and I’m letting myself down.” Du Plessis fielded his questions before Rabada‚ who sat quietly alongside his captain as he awaited his turn‚ taking sidelong glances at a television to his left that showed highlights of him taking his wickets.

Back in Wakanda‚ the masses would have been watching‚ too‚ and wondering — like Rabada — when they would see such magnificence again.

Kagiso Rabada has been banned for the last two Tests of South Africa’s series against Australia‚ the International Cricket Council (ICC) confirmed on ...
Sport
4 years ago

South Africa fast bowler Kagiso Rabada took six second innings wickets to help bowl Australia out for 239 in the first session on day four of the ...
Sport
4 years ago

AB de Villiers rolled back the years to help South Africa assume control of the second test against Australia at St George’s Park on Sunday.
Sport
4 years ago

South Africa struck vital blows in the afternoon session to have Australia 86 for three at tea in the second test at St George’s Park on Sunday.
Sport
4 years ago