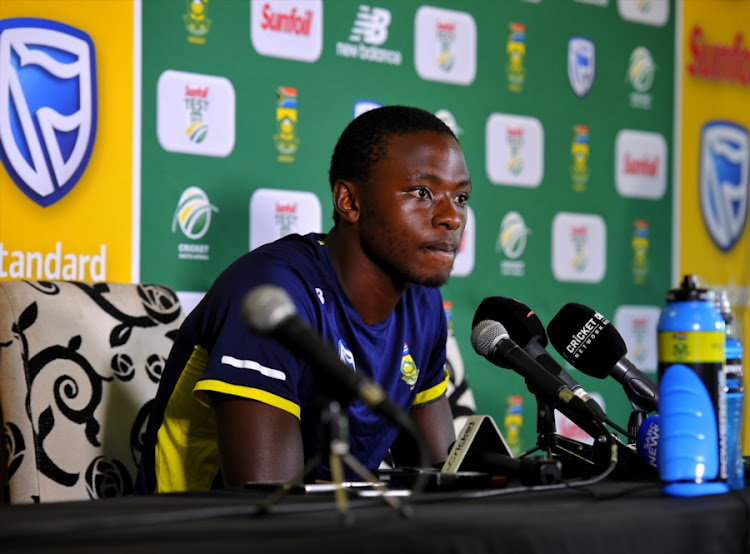 Kagiso Rabada of the Proteas at the post press conference after day 4 of the 2nd Sunfoil Test match between South Africa and Australia at St Georges Park on March 12, 2018 in Port Elizabeth, South Africa.
Image: Ashley Vlotman/Gallo Images

A shoulder charge? A brushing of shirts? An extraordinary reaction to an ordinary event?

A deserved comeuppance for a repeat offender? A cynical manipulation of the rules?

That focus will sharpen on Monday‚ when Rabada’s appeal against his two-match ban is heard.

Michael Herron‚ a prominent New Zealand queen’s counsel‚ will hear the case and then have 48 hours to deliver his decision.

Dali Mpofu‚ the high profile advocate who in 1999 had Makhaya Ntini’s conviction for rape overturned on appeal‚ will represent Rabada.

Should the fast bowler prevail he will be free to play in South Africa’s last two tests against Australia.

Should his ban be upheld he will be a spectator in a series he played a major role in keeping competitive by taking 11/150 in Port Elizabeth to help South Africa level matters at 1-1.

What with the third Test at Newlands starting on Thursday‚ the clock is ticking.

The prevailing South African narrative on the saga has painted Rabada as the victim of both the ICC’s demerit system and of the Australians’ knowledge of how to play that system.

But Rabada‚ test cricket’s No. 1-ranked bowler and also it’s most demerited player‚ is his own worst enemy.

He has had five dealings with match referees in 13 months‚ one of which resulted in a one-match ban.

He had five demerit points hanging over his head going into the St George’s Park test.

Three more points‚ Rabada and everyone else knew‚ would result in a suspension.

As in other matters of law‚ ignorance was no defence.

“Match referees meet with team leaders at the start of each series‚ and use this opportunity to talk about any trends in player behavior and the way the code is to be applied‚ and the teams are advised where the players in an upcoming series stand with respect to their tally of demerit points‚” an ICC spokesperson said.

Both the South Africans and the Australians have admitted they had or would consider trying to provoke players who are closer to a ban from acting in a way that would attract more demerit points.

Does the ICC accept that this practice‚ akin to footballers diving to try and have opponents carded‚ is a problem?

“There have been comments made about provoking players with demerit point tallies but after 18 months of this new system we have seen few‚ if any‚ examples of it actually happening.

“In 854 days of international cricket in 2017 we saw just six code of conduct offences level two and above. The majority of cricket takes place without incident.”

An example may have been Mitchell Marsh swearing at Rabada after the latter had dismissed the former in the second innings at St George’s Park — rare for departing batsmen.

But the system worked: that earned Marsh a fine and a demerit point.

Despite that South Africans have been vocal in their support of Rabada‚ with former Springbok lock Bakkies Botha climbing in boots and all.

“Steven Smith gets acquainted with KG’s replacement‚” ran the headline across a photograph of Botha‚ in cricket whites‚ hulking over Smith in a post on Botha’s twitter account on Friday.

Late on Wednesday night Vernon Philander appeared to tweet‚ “Haven’t really seen the footage of this incident but by the looks of this … Steve Smith gave ‘KG’ the shoulder.

“He could have avoided any contact but to me he is just as guilty. Trying some football skills to get a penalty? Pity he didn’t dive to top it off.”

By Thursday morning Philander had disowned‚ and deleted‚ the tweet: “Someone posted a nice little article on my behalf. Sorry for all the drama or entertainment caused.”

Talk of spectator boycotts at Newlands and the Wanderers‚ where the fourth Test starts on March 30‚ if Rabada remains banned is circulating.

But it seems Rabada himself has had a change of mind on how guilty he is‚ which will strike observers as odd considering he is fighting match referee Jeff Crowe’s decision to lump him with a fine and three demerit points.

“It’s debatable‚” Rabada said according to reports published on Friday when he was asked whether he had been harshly dealt with.

“I take responsibility for what happened. On the video it looks like I got into the guy’s space‚ so I shouldn’t have done that. I’ll say 50/50‚ it’s my fault. I didn’t feel anything in the moment.”

Not that anybody’s opinion on the issue matters‚ and that goes for Rabada as much as it does for the expensive lawyers involved.

The fact is the code of conduct is not going to change because players who fall foul of it‚ and their supporters‚ are unhappy about being punished.

What will have to change is player behaviour‚ especially that of repeat offenders like Rabada.

South Africans hoping to see Kagiso Rabada let fly in the third test against Australia at Newlands next week might feel heartened to learn that the ...
Sport
4 years ago

Advocate Dali Mpofu in Rabada's corner as he fights ban

Cricket South Africa has appointed top advocate Dali Mpofu to fight the cause of Kagiso Rabada - as the world’s best Test bowler appeals a two-match ...
Sport
4 years ago

The Kagiso Rabada saga is set to drag on following the fast bowler’s decision to appeal his two-Test ban.
Sport
4 years ago

If you haven’t already noticed‚ Lungi Ngidi is huge.
Sport
4 years ago