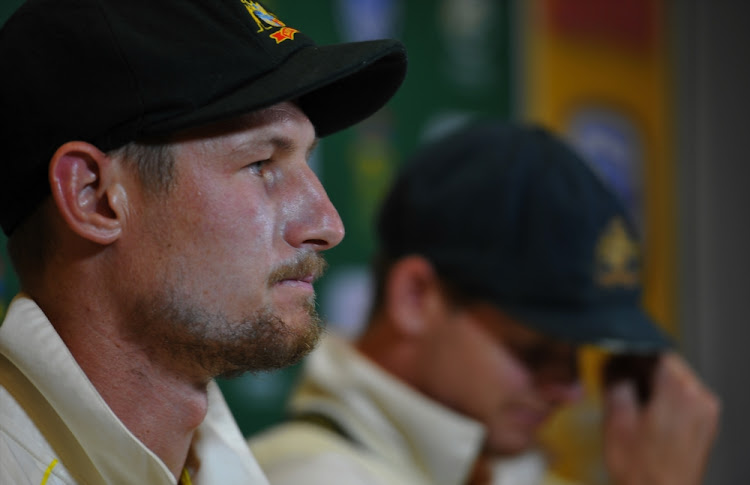 Steven Smith and Cameron Bancroft of Australia during day 3 of the 3rd Sunfoil Test match between South Africa and Australia at PPC Newlands on March 24, 2018 in Cape Town.
Image: Ashley Vlotman/Gallo Images

South Africa’s test series against Australia has already seen more than its share of drama‚ but the most explosive episode yet unfolded at Newlands on Saturday when the visitors admitted to ball-tampering.

Television footage taken on day three of the third test showed Cameron Bancroft holding the ball in his left hand‚ rubbing the rougher of its two halves with his right‚ and then putting his right hand in his trouser pocket.

As the umpires summon him‚ perhaps to ask what’s in his pocket‚ Bancroft appears to take a yellow foreign object out from his righthand pocket and drop it into his underwear.

Bancroft produces a black fabric pouch of the type used to protest a pair of sunglasses.

The umpires seem satisfied with that explanation as they do not change the ball and do not dock Australia five penalty runs‚ the standard practice if they suspect the condition of the ball has been changed illegally.

“I saw an opportunity to use some (sticking) tape‚ get some granules from the rough patches on the wicket and try to change the ball condition‚” he said.

“It didn’t work; the umpires didn’t change the ball. But once I was sighted on the screens and having done that‚ that resulted in me shoving it down my trousers.

“I want to be here because I’m accountable for my actions as well.

“I’ve got to live with the consequences and the damage to my own reputation that that comes with.

“I sit before you today and I’m not proud of what’s happened at all.”

Australia captain Steve Smith took a large share of the blame as the head of what he called the “leadership group”‚ which presumably means him and vice-captain David Warner and senior players like Josh Hazlewood‚ Mitchell Starc and perhaps Nathan Lyon.

“The leadership group knew about it‚” Smith said. “I’m not proud of what’s happened. It’s not within the spirit of the game.

“It’s certainly not on and it won’t happen again‚ I can promise you that‚ under my leadership.”

“It was a poor choice and we deeply regret our action.”

Smith denied that coach Darren Lehmann and his staff were guilty or had knowledge of the plan‚ and claimed ball-tampering hadn’t happened under his leadership.

“Hopefully we’ll learn something from it‚” Smith said. “I’m embarrassed. I know the boys in the sheds are embarrassed as well. I feel for ‘Cam’ as well.

It was a poor choice and we deeply regret our action

“It’s not what we want to see in the game. It’s not what the Australian cricket team’s about. Being the leader of the team I’m incredibly sorry for‚ I guess‚ trying to bring the game into disrepute the way that we did today.”

Smith said he wouldn’t consider resigning: “I still think I’m the right person for the job. Obviously today was a big mistake on my behalf and on the leadership group’s behalf.

“But I take responsibility as the captain. I need to take control of the ship.

“This is certainly something I’m not proud of and something that I hope I can learn from and come back strong from.

“I am embarrassed that I’m sitting here talking about this. We’re in the middle of a great series and for something like this to overshadow the great cricket that’s been played and not have a single cricket question in here‚ that’s not what I’m about and not what the team’s about.

“We’ll move past this. It’s a big error in judgement but we’ll learn from it and move past it.”

Would Smith have been contrite had his team’s guilt not been confirmed?

“I think‚ deep down‚ yeah‚ I would. It’s not what we’re about. It’s a poor reflection on everyone in that dressingroom‚ particularly the leaders of the group.

“So‚ yeah‚ if we weren’t caught I’d still feel incredibly bad about it.”