Shots fired‚ but no war at Wanderers 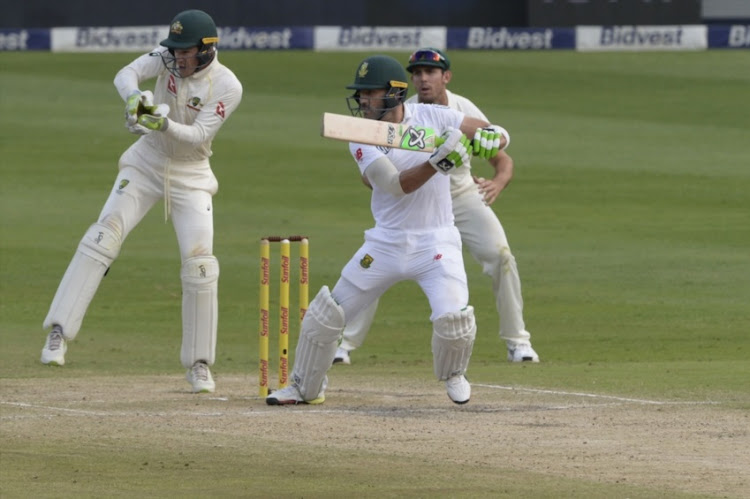 Faf du Plessis of the Proteas during day 3 of the 4th Sunfoil Test match between South Africa and Australia at Bidvest Wanderers Stadium on April 01, 2018 in Johannesburg, South Africa.
Image: Lee Warren/Gallo Images

“Serious sport‚” George Orwell famously observed in an essay written 73 years ago but more searingly true now than ever‚ “is war minus the shooting.”

Had he been at the Wanderers on Monday‚ the penultimate day of the fourth Test between South Africa and Australia‚ he would have considered his opinion confirmed.

Batting under suitably Orwellian‚ leaden skies‚ Dean Elgar resisted all temptation to squeeze the trigger and take a run for 180 of the first 199 balls he faced in an innings that started on Sunday.

That’s 30 overs‚ the equivalent of an entire session‚ blocking and leaving. Or marking time and staring out of a trench.

Elgar spent the remaining 19 of those balls going from nought to 50‚ which he reached with an artilleric straight six off Mitchell Marsh — but he still made the slowest half-century in the past 13 years of Test cricket.

Faf du Plessis had his troublesome right index finger smashed to a bloody pulp by Pat Cummins‚ who also delivered a glancing blow to his helmet.

Then Du Plessis lashed a ball from Nathan Lyon that thudded into Peter Handscomb’s shoulder as he cowered‚ helmeted head in hands‚ in surrender at short leg.

After lunch Cummins found the shoulder of Du Plessis’ bat and Handscomb‚ by then a safer distance away at second slip‚ dived to secure a fine catch that removed South Africa’s captain for 120 — his first century in 14 trips to the Test crease and only the third time he has not been dismissed in the single figures in his seven completed innings in the series.

Du Plessis trudged off after a tour of duty of almost four hours‚ pausing at the boundary to remove his battered‚ bloodied gloves.

He signed one of them and give it to a youngster‚ who marvelled at it as if it were a medal.

Du Plessis showed grit to soldier on after Cummins nailed the same finger he broke in February‚ and his reward was another innings in the style of the epics he made on his debut in Adelaide in November 2012‚ when he scored 78 and 110 not out to save the match.

This match should not need saving by the South Africans.

Their second innings dragged on like a thousand-mile march because they were concerned with putting as much distance as possible between their wounded and the Australians.

Kagiso Rabada has a stiff lower back‚ Morne Morkel an abdominal strain‚ and Vernon Philander — according to team management — “a strapped groin which has been managed throughout the match”.

How do you strap a groin? How do you unstrap it without inflicting cruel and inhuman punishment on some of the unfortunate strapee’s most sensitive skin?

Even if his team hadn’t faced those challenges‚ it made sense for Du Plessis to continue batting until tea before declaring and leaving the Australians to score 612 to win and level the series.

Simply‚ because South Africa didn’t need to win the match to win the rubber.

That bulletproof truth went unheard in Australia‚ where social media was bilious about the South Africans having the audacity to claim the right they had earned to dictate terms.

Aussies‚ it seemed‚ don’t take kindly to having the line drawn for them.

Best they shut up and sort out their cheats before they pronounce on how other teams choose to play the game.

“I am always amazed when I hear people saying that sport creates goodwill between the nations‚ and that if only the common peoples of the world could meet one another at football or cricket‚ they would have no inclination to meet on the battlefield‚” Orwell wrote all those years ago.

“But the significant thing is not the behaviour of the players but the attitude of the spectators: and‚ behind the spectators‚ of the nations who work themselves into furies over these absurd contests‚ and seriously believe — at any rate for short periods — that running‚ jumping and kicking a ball are tests of national virtue.”

That they are not‚ and neither is war.