SA a win away from historic series in England 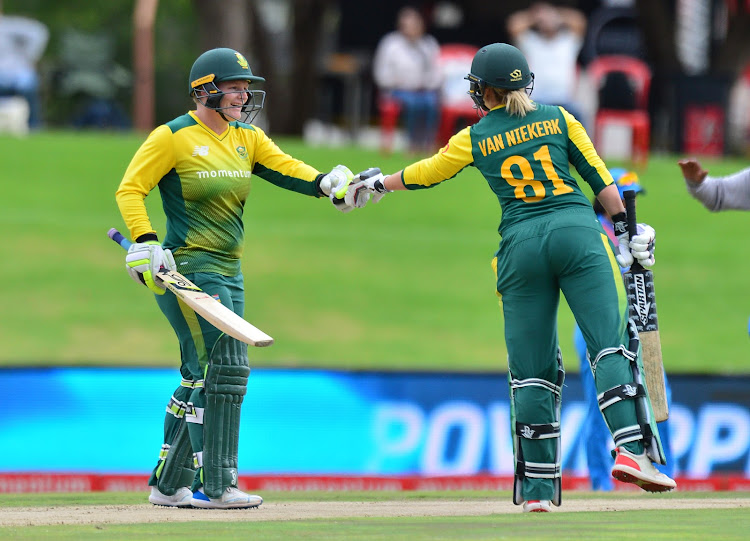 South Africa are sick of being beaten in England‚ where the home side have prevailed in all nine series the teams have contested across all formats — including in last year’s World Cup.

But Dané van Niekerk’s women are a win away from changing all that.

The seven-wicket smack South Africa gave England in the first one-day international in Worcester on Saturday means another success in Brighton on Tuesday will wrap up the rubber.

“It was a near perfect game‚” the odd man out in South Africa’s dressingroom‚ coach Hilton Moreeng‚ said on Monday.

“Everything happened according to plan.”

Three wickets each for Shabnim Ismail and Ayabonga Khaka‚ and Raisibe Ntozakhe keeping the damage down to 21 runs in her 10 overs‚ limited England to 189/9.

Then Lizelle Lee‚ who kept wicket and opened the batting‚ scored an undefeated 92 and shared a stand of 113 with Van Niekerk — who made 58 after walking to the crease after three overs with the scoreboard reading 5/2 — to take South Africa home with 27 balls to spare.

“We all know she’s a very explosive batter but she was on the field for 95 overs‚ which shows her maturity and fitness‚” Moreeng said of Lee’s peerless performance.

That helped the visitors exorcise the ghost of their last match against these opponents: a cliffhanger of a World Cup semi-final in Bristol in July‚ which South Africa lost by two wickets with two balls to spare.

“We all now what happened in the last game in which we played each other; it was important for us to start the series well‚” Moreeng said.

“The confidence I saw in the changeroom was a sign of a team that’s growing in stature.

“It was the perfect start to the series. But it’s going to be tough because now England are a team who have been wounded on home soil.”

How do South Africa meet that challenge?

“Focus. We must stay focused — feet on the ground.

“We need to realise we are up against a very good side; the current world champions.

“We have a side that starting to believe they can not only compete but also win.”

Translation: you’ve it once. Now go do it again.