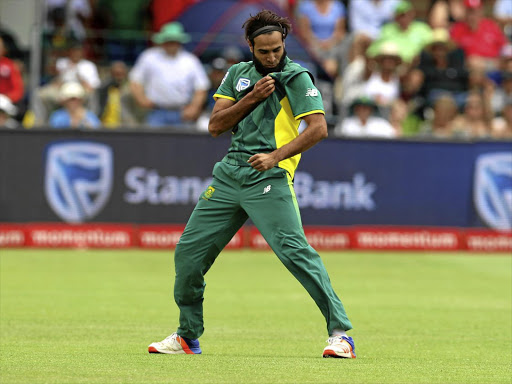 No AB de Villiers and Morné Morkel was a given‚ no Dale Steyn was all but confirmed last week‚ but no Imran Tahir?

Why wouldn’t the selectors pick him for the five ODIs and sole T20 South Africa will play in Sri Lanka in July and August?

“…we have taken the strategic decision to rest Imran Tahir so that we can get a clearer picture as to who our best second spinner is to back him up at the World Cup‚” selection convenor Linda Zondi was quoted as saying in a Cricket South Africa release on Monday that named South Africa’s squad.

“Imran will be our first-choice spinner at the World Cup [in England next June] but‚ if we play him against Sri Lanka‚ it is unlikely that we will be able to play both Tabraiz Shamsi and Keshav Maharaj.

“By taking this route we will be able to play the two of them together.

“Tabraiz has been the outstanding bowler in franchise white-ball cricket this past season.

“Keshav has been outstanding for us in red-ball cricket and we need to give him the opportunity to show us what he can do at international level in the ODI format.”

He had the third best strike rate and was 11th in terms of economy rate with a respectable 4.50.

To pigeonhole left-arm orthodox spinner Maharaj‚ who has taken 74 wickets in his 20 Tests‚ as a one-format specialist would insult this intelligent‚ versatile player.

He has featured in only two ODIs — both against England last year — and deserves more.

But without Steyn‚ who told TMG Digital last week that he would return to Hampshire after the Test series that starts the tour to Sri Lanka‚ Morkel‚ who retired from international cricket in April‚ and Tahir‚ South Africa could be short on experience.

Despite having only played two ODIs for the Proteas‚ middle order batsman Temba Bavuma has not given up hope of representing South Africa at the ICC ...
Sport
4 years ago

It’s usually cause for concern when a South Africa fast bowler’s workload gets bigger‚ but not when the quick in question is Dale Steyn.
Sport
4 years ago

Kagiso Rabada‚ Andile Phehlukwayo and Lungi Ngidi have played 77 ODIs between them‚ and more than half of those caps — 48 — belong to Rabada.

Steyn‚ Morkel and Tahir have more than four times as many games in the 50-over stuff behind them: 318.

De Villiers‚ who called it quits for South Africa last month‚ ostensibly has been replaced by Reeza Hendricks‚ who is uncapped but for a dozen T20 internationals.

But the innovative Heinrich Klaasen is also in the squad and could be a better fit for the mission impossible of stepping into De Villiers diamond-soled shoes.

Junior Dala‚ who has played three T20s for South Africa‚ cracks the nod in the wake of Morkel calling it quits in April.

Wiaan Mulder steps into the breach left by Chris Morris‚ who was not considered because he is recovering from a back injury.

The South Africa A squad to play two four-day games in India in July and August was also named‚ along with a side for a triangular A team tournament featuring India and Australia in India.

Batsmen Sarel Erwee and Rassie van der Dussen‚ and fast bowlers Mthiwekhaya Nabe and Anrich Nortje‚ have not played at this level before‚ while Temba Bavuma’s name sticks out in the one-day squad.

Bavuma has carved a niche as a dogged Test batsman‚ and would add significantly to his worth by finding the extra gear required to succeed in the shorter stuff.