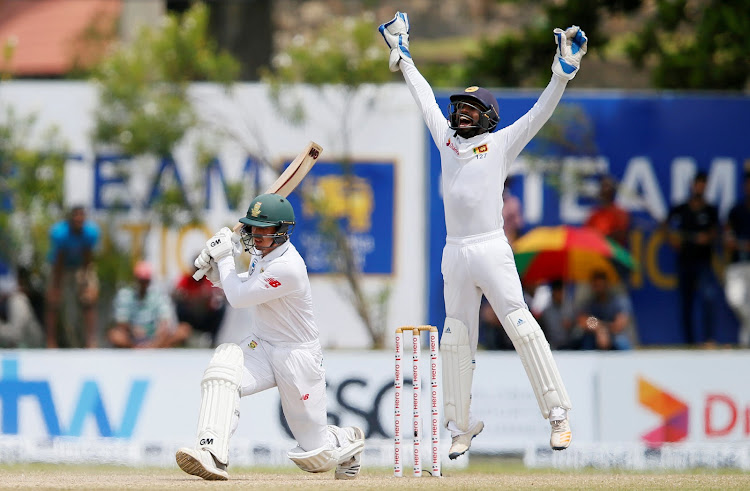 Sri Lanka off-spinner Dilruwan Perera completed a 10-wicket match haul as the hosts thumped South Africa by 278 runs inside three days to go 1-0 up in the first match of the two-test series on Saturday.

South Africa were all out for 73 in their second innings, their lowest since their readmission to international cricket in 1992 following a ban for apartheid, in an abject batting capitulation.

It was also their lowest total in Sri Lanka, eclipsing the 126 they posted in the first innings on Friday.

Sri Lanka opener Dimuth Karunaratne, who returned to the side having missed the series in West Indies with injury, was adjudged the player of the match for his first innings 158 followed by a fluent 60 in the second.

“After I got injured, I worked really hard in the A team to get my form back,” Karunaratne told the host broadcaster. “I had to work really hard on this wicket. I think I always want to play positively and back my strengths. That’s what I always do on turning tracks.”

Equally impressive was Perera who followed up his first-innings figures of 4-46 with six for 32 in the second for his best bowling figures in tests. Veteran left-arm spinner Rangana Herath picked up three wickets in the second innings.

“Every spinner likes to bowl in Galle. I get a lot of drift here,” Perera said. “It’s very easy to bowl with Herath at the other end.

“South Africa have struggled in the past against off-spinners. Rangana created pressure from one end, and I got the wickets.”

The Sri Lankan spinners took 17 of the 20 South African wickets to fall in the opening test and the touring side would need to find a solution to their batting woes with the second and final match starting on Friday in Colombo.

“No matter how much you train before a series like this, you can’t face the quality of spin you’ll get in the test match when you’re playing in the nets,” South Africa captain Faf du Plessis said after the match. “I think the surprising thing for us was the wetness of the outfield with the rain.

“Sri Lanka looked to get 20 wickets with spin. If it reverses, our seamers become a threat, but because of the wet outfield reverse wasn’t a factor.”

Earlier, Sri Lanka were all out for 190 in their second innings, leaving South Africa a target of 352 on a surface providing lot of turn and bounce for the spinners. Left-arm spinner Keshav Maharaj took 4-58 for the touring side.

Not a happy birthday for Faf du Plessis

What would you want for your 34th birthday? Not your team’s lowest total in Sri Lanka‚ nor to be dismissed by the only seamer in the home side’s ...
Sport
3 years ago

Faf du Plessis had an enquiry of his own after responding to reporters’ queries in Cape Town on Sunday: “No AB questions?”
Sport
3 years ago