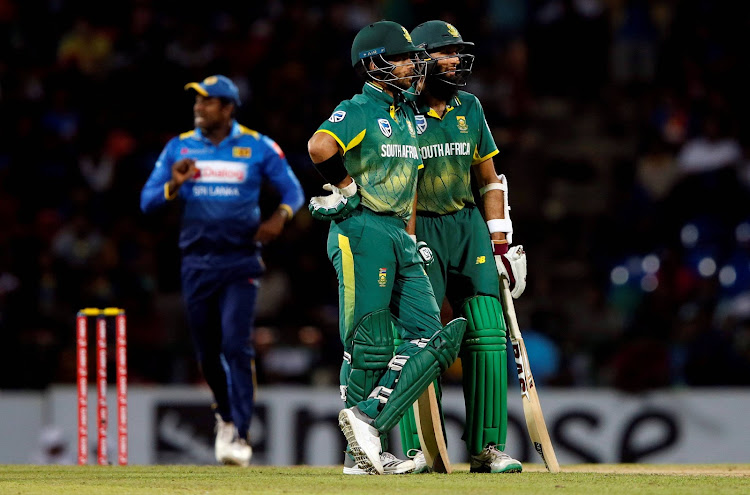 Kandy wasn’t a good place to be a bowler on Wednesday, not with runs raining like the misty mountain showers that took 40 overs out of the fourth one-day international.

That was first true while Sri Lanka’s Thisara Perera and Dasun Shanaka were launching South Africa’s bowlers to and beyond all parts in a seventh-wicket stand of 109 that set the scorebook on fire for 68 deliveries.

Thus were Sri Lanka propelled to 306/7 in their 39 overs. The creative accounting of Duckworth and Lewis set South Africa a target of 191 from 21.

JP Duminy’s 38, more sweetly struck than anything else he has done in four innings in which he has twice passed 50, was the closest the visitors came to matching Shanaka’s dominance in their reply of 187/9.

Sri Lanka’s win, by three runs, was their first in an ODI against South Africa in a dozen attempts.

But the visitors should have won, what with them needing 63 off the last 54 balls of the game with seven wickets in hand.

Then the ominous 13th over claimed the wickets of the threatening Heinrich Klaasen and Duminy, and with them went South Africa’s momentum.

Seven wickets crashed for 75 runs in 65 balls in what would have been added to South Africa’s damning list of chokes had it not happened in a game that didn’t matter because they have already won the series.

The fuel for the home side’s blaze was the bat of Shanaka, who played the last of his first nine ODIs against Zimbabwe in November 2016.

Where the hell has he been, you might have thought as he lashed 65, his maiden half-century, off 34 balls — four of them hit for four, five for six, and only seven of them dots.

And of the latter just three could be described as defensive.

Shanaka hit the ball with irrisistable confidence, and towards the end of the innings he even had the unpanickable Quinton de Kock — South Africa’s captain, remember — staring down hard at his arms folded tightly across his chest, perhaps to stop him from throwing them up in despair.

Neither De Kock nor any of his bowlers had an effective answer to Shanaka’s assault.

Each of his fours streaked to a different boundary and he put bowlers as contrasting as Keshav Maharaj, Andile Phehlukwayo and Junior Dala over the midwicket fence for six.

Not that De Kock should be judged too harshly. How does anyone answer something like that, particularly on a willing pitch and a fast outfield only a few metres bigger than the international minimum — both kept in prime condition, despite the rain, by vast squadrons of typically enthusiastic Lankan groundstaff.

Only Duminy, who took 2/35 from his six overs, got away with bleeding runs at fewer than one-a-ball.

Shanaka, who took guard in the 28th over, was finally extinguished in the last over of Sri Lanka’s innings.

You could have had a wry laugh about the fact that Phehlukwayo got him not with a slower bouncer, neither an off-cutter, a knuckleball, nor a back-of-the-hander, but with an old-fashioned seam-up delivery that he slapped straight to cover.

But there was no laughing by then, not by the South Africans at any rate. It was a case of getting out of there alive.

They did, and while Hashim Amla and Duminy were clubbing and clipping 57 off 29 balls for the third wicket victory seemed assured.

Only for Amla to slice a drive to point off Akila Dananjaya in the 10th to go for a 23-ball 40. Then Dhananjaya de Silva had Klaasen — in his first innings of a tour he has been on since the Test series — smartly caught in the covers by Angelo Mathews and Duminy ran himself out trying to take a single that never was.

The direct hit came like a comet, swift and true, from extra cover with two metres to spare. The fielder? That man Shanaka.

The rest of the innings was uncertain, ungainly and unlovely, and it killed off De Kock’s stated ambition of winning the series 5-0.

Whether the visitors can make it 4-1 or the home side can save face with a 3-2 result will be decided in Colombo on Sunday.