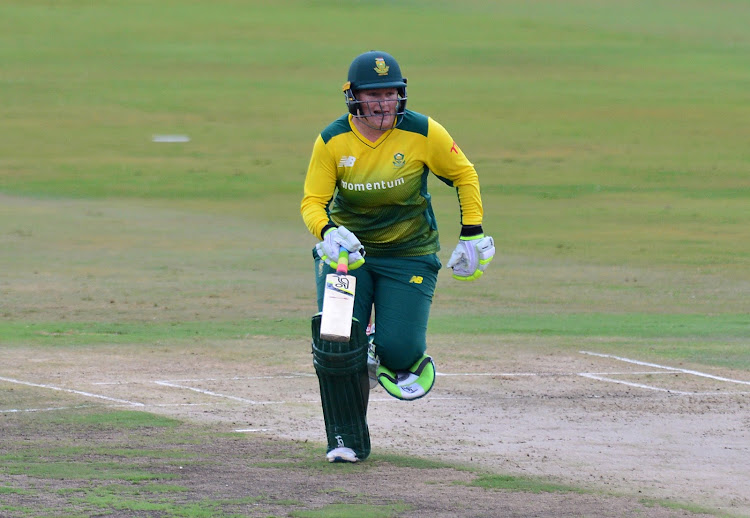 Lizelle Lee lit up the final of the Super League in Brighton on Monday‚ hammering 104 to blaze Surrey Stars to a total of 183/6 in their 20 overs.

Then almost newlyweds Marizanne Kapp and Dané van Niekerk took 5/51 in community of property — or 2/14 and 3/37 in antenuptial terms — to help dismiss Longborough Lightning for 117.

Lee lashed her runs‚ only 16 of which she actually had to run‚ off 58 balls with 13 fours and six sixes.

Fast bowler Kapp and leg spinner Van Niekerk‚ who clipped a cameo 15 not out‚ took 3/17 in the three overs they bowled in tandem.

Van Niekerk ended her second over‚ the 10th of the innings‚ by dismissing Georgia Elwiss and Georgia Adams with consecutive deliveries.

She was denied a shot at a hattrick when the next over from that end was bowled by Mady Villiers.

Lee’s innings was the tournament’s highest score and only the second century made this year.

Van Niekerk and Kapp finished fifth and joint-sixth among the wicket-takers with 13 and 11 scalps.

The only other South African in the tournament‚ Mignon du Preez‚ scored 174 runs in 10 innings for the Southern Vipers.

As much as Surrey thank their stars for their Saffer Stars‚ the South Africans will no doubt be grateful not only for the money they’ve earned but also for the game time they otherwise would not have had.

As Lee said after the final‚ with reference to the competition being played over two rounds for the first time‚ “It was good to know that if you didn’t have a good first round you could always come back in the second round.”

In just days more than a month in England‚ Lee had 11 innings — only one fewer than she had for South Africa in T20s for the whole 2017-18 season.

Two out of three ain’t bad. Except when you lose two and are left with only one. Sponsors‚ that is.
Sport
3 years ago

Cricket South Africa (CSA) say they will reveal by the middle of next month what they are going to do about the mess that is their T20 league. And ...
Sport
3 years ago