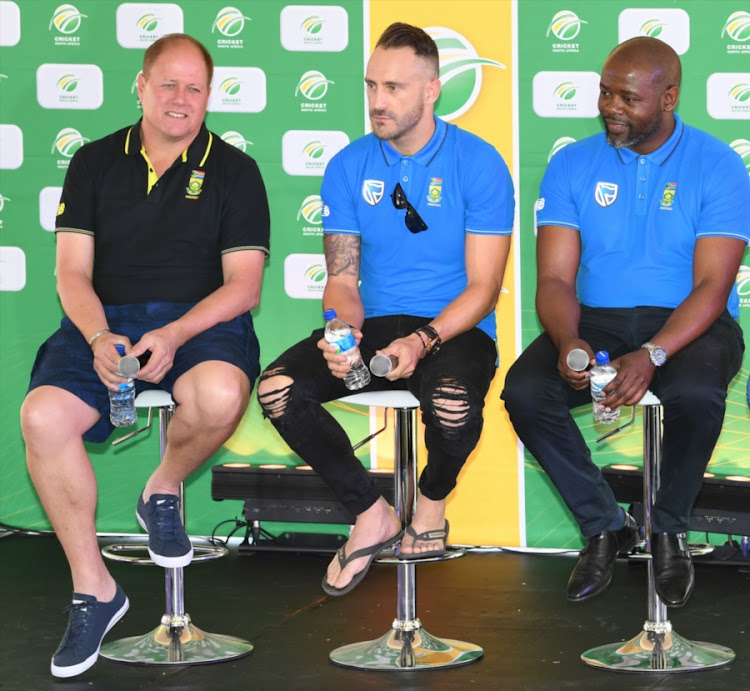 Proteas captain Faf du Plessis says it is important for Cricket South Africa (CSA) to get the Global League T20 tournament off the ground as it could provide a platform for players who may not get an opportunity to feature in other tournaments.

Du Plessis was speaking at CSA's season launch at SuperSport Park in Centurion this week ahead of what will be a preparatory season for the 2019 Cricket World Cup.

SA will host Zimbabwe‚ Pakistan and Sri Lanka in the 2018/19 home season and there is a gap in the domestic calendar for the tournament to take place.

Du Plessis said they have been informed of a meeting that'll take place this weekend that will give them direction regarding the tournament.

The tournament was postponed last year and CSA has had problems in getting the tournament back on track this year.

“It's really important for CSA to have the tournament because it's important for the youth of this country to have a crack‚" Du Plessis said.

"If you look at the youngsters who've come through the Indian Premier League‚ they're able to put out good teams because there's a great domestic circuit where the young players are exposed to cricket with the best players from around the world.

"It's important for us as a cricketing nation to grow with a tournament like that.

"I've been in the IPL for eight years and I can see the window closing on SA players.

"They're looking at Australian and English players‚ which means we need a tournament like the Big Bash League where the players can perform well to get recognition.

“I'm a big believer in transparency and being open and honest in regards with what's going on.

"I'm hoping‚ as CSA chief executive Thabang Moroe said‚ there's going to be a big meeting happening this weekend from where we could get some answers that we'll be looking for.”

While SA were consummately beaten in the Test series on their recent tour to Sri Lanka‚ they exacted a measure of revenge in the first part of the ODI series where they won the first three matches comfortably before slipping back into defeat patterns for the remaining matches of the tour.

Du Plessis said there were performances from some individuals that has given the team hope for the build-up to the World Cup while their young all-rounders within the Proteas squad have also provided substantial reasons for optimism.

Du Plessis left midway through the limited overs leg of the Sri Lanka tour with the shoulder injury but should be fit for the start of his team's international campaign against Zimbabwe at the end of the month.

“We went to Sri Lanka looking to have more questions answered‚" he said.

"We went there with quite a few gaps in the team and one or two questions marks that needed to be answered.

"Some responded nicely to with someone like Reeza Hendricks who wasn't even close to the 15 getting a 100 in one game‚ putting pressure on the guys who are there.

"That's the purpose of giving people an opportunity; to put more pressure to eliminate OK performances.

“In regards with the all-rounders‚ there are a few questions that need to be answered there but fortunately we have a very good youngster in Wiaan Mulder.

"And with youngsters‚ you have the opportunity of giving them more opportunities and time whereas with an older guy‚ you're more inclined to being short-sighted in what you're trying to get from the individual.”

Alastair Cook is a fine cricketer who will‚ after the fourth Test against India that starts on Friday at The Oval‚ join the ranks of the retired.
Sport
3 years ago

Themba looked like a champ as he tied the knot.
TshisaLIVE
3 years ago