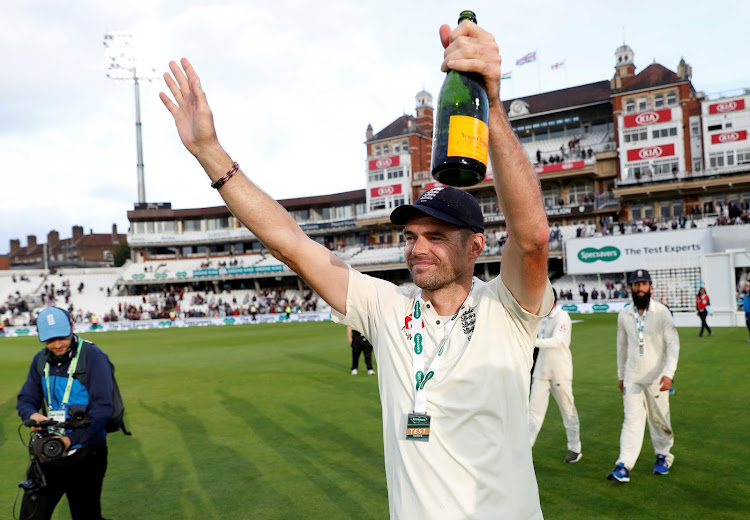 England's James Anderson celebrates after the fifth and final Test match against India at The Kia Oval in London on September 11, 2018. England won the series 4-1.
Image: Reuters/Paul Childs

To quote Mohammed Shami’s middle stump nine balls after the last drinks interval at The Oval on Tuesday‚ “Clunk.”

With that England beat India by 118 runs to seal the series 4-1.

And James Anderson‚ whose in-swinger to Shami would have been too good for many proper batsmen‚ never mind a No. 10‚ became‚ in his 143rd Test‚ the most successful fast bowler in the history of the game.

Anderson’s 564 wickets took him past the previous owner of that honour‚ Glenn McGrath‚ and put him behind only Muttiah Muralitharan‚ Shane Warne and Anil Kumble among the 2,932 men who have dared to mark out a run-up in a Test.

The most gracious crowd in cricket anywhere‚ around 7,000 of them out of the total of 103,000 for the match‚ rose under the gunmetal grey skies of a still warm autumnal day to pay homage‚ and “Oh! Jimmy‚ Jimmy … Jimmy‚ Jimmy‚ Jimmy‚ Jimmy Anderson” was the only song in town.

They’re spoilt at The Oval: on Monday Alastair Cook crowned a fine career by scoring 147 in his last Test innings.

No-one can work out how someone as awkward as Cook ended up as England’s leading run-scorer‚ but there is no surprise that a sleek thoroughbred like Anderson is top of his heap.

All those sniping away-swingers delivered with an action as strong and smooth as silk itself had to amount to something big.

“It’s a little freaky that he’s 36 and still going‚ and almost 150 Tests is also amazing‚” one of Anderson’s supporters‚ Dale Steyn‚ told TimesLIVE on Wednesday.

Did the fact that Anderson had the most wickets by a pace bowler make him the best quick out there?

“I’m a fan of fast bowling and very often change my opinion on who’s the best bowler by who I currently feel inspired by‚” Steyn said.

“It’s just opinion. It doesn’t matter if he’s the best or not: look at what he’s achieved‚ that’s indisputable.” Steyn spoke from Southampton‚ where he is playing for Hampshire.

“Currently I’m in English conditions so watching Jimmy is definitely going to gear me up to bowl better here‚” Steyn said.

“That would change if I was‚ say‚ in South Africa watching Morné {Morkel] or ‘Vern’ [Vernon Philander].

“But [Anderson] is officially the most successful fast bowler of all time. That’s pretty awesome‚ and something not many others will have the opportunity of achieving.

“Well done to him — richly deserved.”

Similar sentiments have come Steyn’s way over the years‚ and more will follow when he takes his next wicket and passes Shaun Pollock’s total of 421 to become SA’s highest wicket-taker‚ regardless of bowling style.

A slew of injuries in the past three years has threatened to derail the “Phalaborwa Express” but a match haul of 7/71 against Somerset this week means he is on track to steam to the record this summer.

The other half of Hampshire’s new-ball attack is former South Africa player Kyle Abbott‚ who also went for 71 runs against Somerset — and took 11 wickets.

“It’s been plenty fun sharing the new ball with [Abbott]‚ who’s been in ridiculous form of late‚” Steyn said.

Abbott’s 47 scalps means he is fourth among the wicket-takers in the first division of the county championship.

The names of those in third and fifth place will also resound in South African ears: Simon Harmer and Morkel‚ who have claimed 51 and 45.

Abbott‚ Harmer and Morkel have played between eight and 12 matches‚ while Steyn has five games under his belt for 20 wickets at 19.10.

What does it tell someone who once batted for more than 13 hours against one of the best attacks in the game that he can’t stay at the crease for not ...
Sport
3 years ago