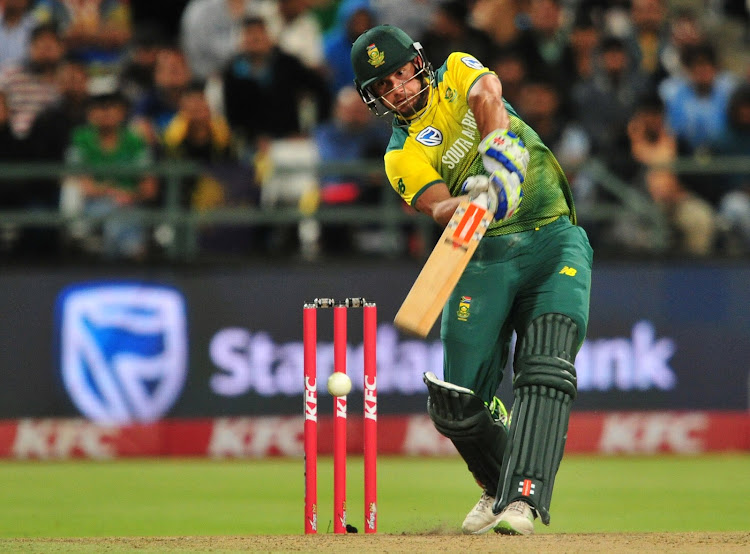 The Warriors batsman Christiaan Jonker, who has one cap for SA in the T20 Internationals, has got the nod ahead of David Miller in the ODI squad that was released by Cricket South Africa on Friday September 14 2018 that will play Zimbabwe starting on September 29.
Image: Ryan Wilkisky/BackpagePix

David Miller might be wondering who he’s peed off and what that might mean as he looks to shoot at the moon that is the 2019 Cricket World Cup.

He might find his answers in Christiaan Jonker’s ability to win friends and influence people despite a solid rather than spectacular record at franchise level.

On Tuesday Miller made himself “indefinitely unavailable”‚ according to a Cricket South Africa (CSA) release‚ to play first-class cricket in the country.

He did so‚ he was quoted as saying‚ to “concentrate on white-ball cricket to make sure that I am in a position to give myself the best opportunity to play for the Proteas in the format that I love”.

But on Friday Miller was listed as “rested” from SA’s squad to play a series of three one-day internationals against Zimbabwe‚ starting on September 30.

That followed his omission for the last of the five ODIs SA played in Sri Lanka in August.

Convenor of selectors Linda Zondi was the selector on tour in Sri Lanka and thus party to picking the playing XI.

He offered‚ by way of explanation‚ a riff on the “it’s not you‚ it’s me” break-up line.

“We want to have a look at Christiaan Jonker‚ who was supposed to go to Sri Lanka but was injured‚” Zondi told TimesLIVE on Friday.

“So it’s not about David Miller not playing‚ it’s about having a look at Jonker.

“If we don’t‚ how will we know if he can do the job at international level?”

Perhaps because he hasn’t exactly made a roaring success of the job at franchise level.

Twenty-six players had more runs‚ seven of them in as many or fewer trips to the crease.

Miller‚ who scored 278 runs in nine innings‚ was among them.

But with four centuries‚ 19 half-centuries‚ a strike rate of 102.41 and plenty of experience from 93 list-A games‚ 31-year-old Jonker clearly can hold a bat.

In his only taste of international cricket‚ a T20 against India at Newlands in February‚ he clipped 49 off 24 balls with five fours and two sixes. Milleresque or what?

And it’s worth remembering that Zondi and his panel have earned the right to think out of the box.

They’ve made precious few mistakes and must be credited with elevating apparently unlikely players like Keshav Maharaj and Andile Phehlukwayo to international level‚ where they have proved they belong.

On top of that‚ Miller could do with a break.

He has played in all but two of SA’s 15 white-ball matches this year‚ appeared in a dozen games in the Indian Premier League and the Caribbean Premier League‚ and is set to feature in the T20x in the Emirates in December and January.

Also‚ Jonker’s selection is firmly in line with the good sense policy‚ as espoused by Zondi and SA coach Ottis Gibson‚ of casting the net as far and wide as it will stretch in preparation for the World Cup. Khaya Zondo’s recall no doubt squares with that thinking.

And it should mark some kind of happy day in the annals of cricket in SA that a selection can be considered contentious because of bat-and-ball factors and not race.

In other news‚ the successfully mended Dale Steyn has been selected to play what would be his first ODIs since October 2016‚ Imran Tahir returns from a rest and Faf du Plessis is in the mix subject to being passed fit.

Quinton de Kock has been given a break‚ as has Kagiso Rabada for the three T20s against Zim that come after the ODIs.

Steyn and Tahir weren’t part of the ODI squad in Sri Lanka‚ where Du Plessis injured a shoulder‚ Heinrich Klaasen is a more than able replacement for De Kock‚ and Rabada must be made to take all the downtime he can get‚ never mind that 23-year-olds don’t need to sleep.

In another possibly foresighted decision by Zondi’s committee‚ SA Africa under-19 and Emerging batsman Matthew Breetzke‚ still 19‚ will be part of proceedings as a “learning experience”‚ a CSA release said.

Du Plessis‚ the release quoted Zondi as saying‚ “will personally take Breetzke under his wing”.

Another dead rubber‚ another loss for SA

It’s hardly surprising that South Africa have followed three banging victories with the whimper of two defeats in their one-day series in Sri Lanka.
Sport
3 years ago