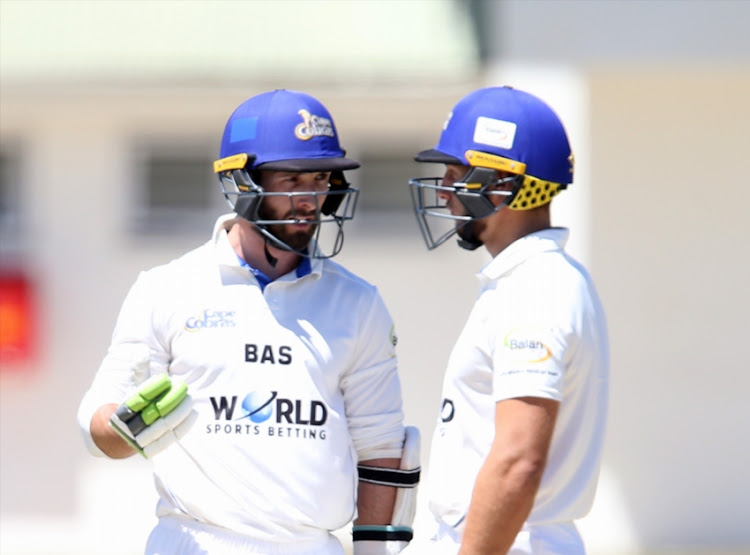 With the South African domestic summer moving to the first part of the limited overs leg‚ the red ball stuff will have to take a break.

However‚ the five rounds of the Four-Day Franchise Series served up some interesting cricket and the Cape Cobras‚ despite their heavy defeat against the Highveld Lions in Paarl on Thursday‚ will remain at the top of the table. This is how the tournament panned out.

The Cape Cobras were superb in four of their five games and even won two games when chasing. That’s a sign of a team who are not only confident in their ability‚ but in knowing when and how to fight back.

Dane Piedt‚ Dane Paterson and Tladi Bokako have been excellent with the ball but Pieter Malan has held the fort with the bat with the likes of his brother Janneman‚ David Bedingham and Zubayr Hamza ensuring that starts weren't wasted. Jason Smith‚ Aviwe Mgijima and Kyle Verreynne also fortified the Cape Cobras effort with their contributions.

However‚ their top order collapses in the past two games will have other teams on the watch when the tournament resumes later in the seasons. The Lions‚ who beat them by 187 runs‚ made the most of this failure.

Enoch Nkwe’s side had one bad showing when they were crushed by the Cape Cobras early in October. After that disappointing game‚ they’ve made up for lost ground with convincing wins against the Knights and the Cobras to keep the latter worried at the top.

This side have some serious batting strength in depth and their varied bowling has come through for them. They had the better of a drawn game against the Titans in Potchefstroom last week but they’ve been consistent in all departments.

They’ll have to start again when the red-ball cricket resumes but fortunately for them‚ they don’t have to face the Cape Cobras.

When the Knights have been good‚ which was the case in the home wins against the Dolphins (five wickets) and the Warriors (284 runs)‚ they’ve been very good.

When they lost to the Cape Cobras (four wickets)‚ they were combative in a highly competitive game but the loss to the Highveld Lions (innings and 22 runs) was disappointing. Their collapse was abject and probably their lowest point in the five matches.

They played some smart cricket in their draw against the Warriors before crushing them in Kimberly. It’s clear this side know how to play the long game but the stiff opposition that are the Lions and the Cobras asked questions they couldn’t quite respond to adequately.

They’ll still be a difficult side in the second batch of five games. Pite van Biljon's runs (572 at 63.77) haven’t gone to waste.

This is also a youngish side with a new coach and at times in their performances‚ it showed. They harried the Dolphins into a shock defeat in Durban and were disappointed not to get more out of draws against the Knights and the Titans despite the adverse weather.

However‚ the manner of the defeats to the Lions and the Knights were disconcerting. They could have a should have batted better in the two innings that doomed them in the losses.

However‚ there’s a fair bit of talent Rivash Gobind can work with. Getting the talent to work cohesively in the manner in which they did in the Momentum 1-Day Cup will be his biggest test this season.

Barring the loss to the Cape Cobras‚ the weather hasn’t been very friendly to the defending champions. In their draws‚ the Titans have been in reasonable position and against the Dolphins‚ they could have won if they had more time.

However‚ those draws need to be converted into wins‚ especially with the kind of form the Lions and Cobras have displayed. The Titans have matches against both sides which will determine the destiny of their title defence.

The weather has been a problem for the Dolphins but they’ve also been poor in their defeats. Vaughn van Jaarsveld has been a run-scoring mainstay (426 at 42.6) but there hasn’t been much around him to buttress his efforts.

That’s the matter Grant Morgan’s side need to fix because from a bowling perspective‚ they haven’t been all that bad. However‚ with the Lions‚ Cobras and Knights having registered serious outright wins‚ they’ll have a tough task fighting back in the tournament.