Rabada in trouble again after Proteas lose against Australia 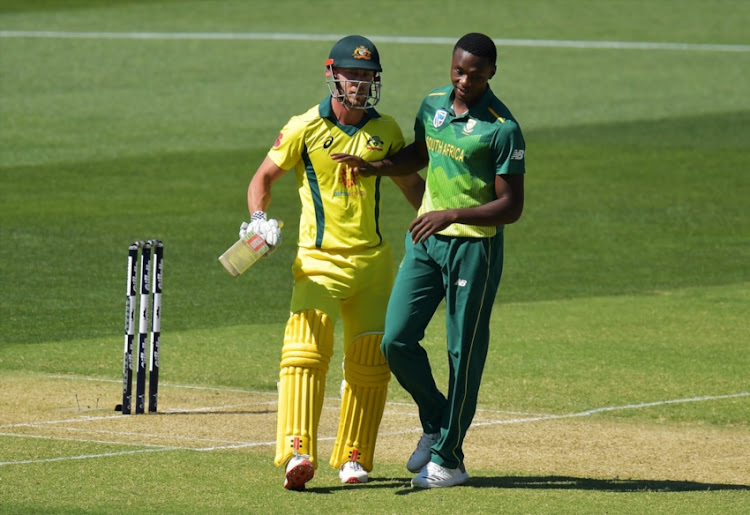 Chris Lynn of Australia and Kagiso Rabada of South Africa react during game two of the One Day International series between Australia and South Africa at Adelaide Oval on November 9, 2018 in Adelaide, Australia.
Image: Daniel Kalisz/Getty Images

South Africa became only the second team to be beaten by Australia in their dozen one-day internationals this year in Adelaide on Friday‚ and potential disciplinary measures could yet be added to that insult.

With Kagiso Rabada taking 4/54 and Dwaine Pretorius claiming 3/32‚ Australia were dismissed for a middling 231.

South Africa sputtered to 224/9 in reply with Faf du Plessis’s 47 and David Miller’s 51 their only scores of more than 19.

That earned the home side victory by seven runs and set up a series decider in Hobart on Sunday.

But the visitors might have to try to win the rubber without spearhead Rabada‚ who could be in trouble with match referee Jeff Crowe for his verbal send-off of Chris Lynn.

Having been hit for a six and three fours off the first four balls of the 27th over‚ Rabada had a hooking Lynn caught behind off his gloves.

In the throes of his celebration‚ Rabada could be seen shouting‚ apparently at Lynn‚ as he came close to the departing batsman.

Rabada has seven demerit points hanging over his head. One more and he will be banned for four white-ball internationals or two Tests‚ whichever come first.

The fast bowler needed the intervention of one of South Africa’s top lawyers — Dali Mpofu — to escape‚ on appeal‚ a ban for a shoulder charge on Steve Smith after he dismissed the then Australia captain during the St George’s Park Test in March.

Crowe was also the match referee in Port Elizabeth‚ and he slapped Rabada with three demerit points‚ which translated into a suspension.

The appeal‚ which was not heard by Crowe but by judicial commissioner Michael Heron‚ saw Rabada’s punishment reduced to one point — which kept him on the field.

Rabada may not be as fortunate this time‚ not least because there won’t be enough time before Sunday’s game to challenge a guilty verdict from Crowe.

For his part‚ Lynn couldn’t see what the fuss was about‚ telling a television interviewer: “Bit of a send-off at the end; I don’t mind at all.”

That South Africa failed to get past the Australians’ bits-and-pieces batting effort‚ in which Aaron Finch’s 41‚ Lynn’s 44 and Alex Carey’s 47 were the highlights‚ bothered Du Plessis.

“We let ourselves down with the bat‚ [I’m] very disappointed‚” he told a television interviewer. “We only needed four-and-a-half an over.

“We needed one more batter to stay with Dave. Good teams should close that down.

“I don't believe that score was worth [Australia] winning; we let ourselves down.

“It’s a quick turnaround‚ so we have to leave our disappointment in the dressingroom.”