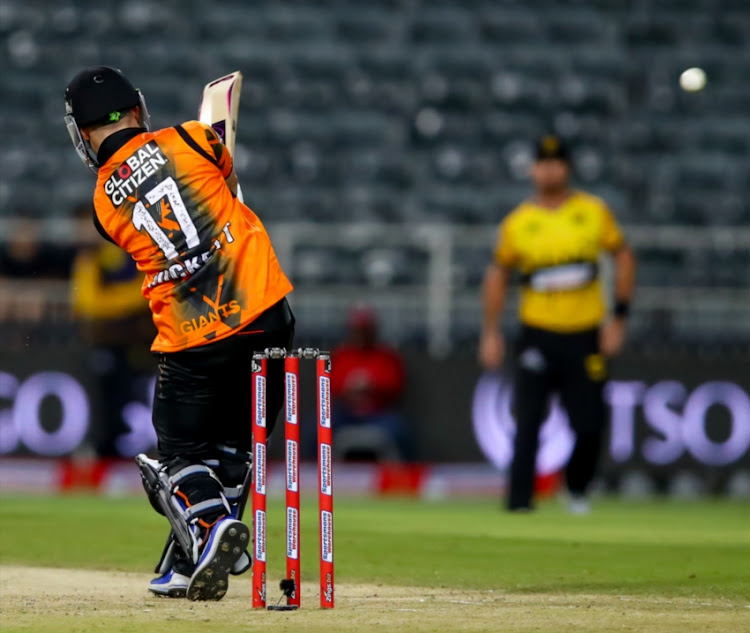 When the umpires ordered the players off the field due to lighting that was soon followed by persistent rain after 5.1 overs‚ the Spartans were stranded on 35/3 after they lost Gihahn Cloete‚ Tony de Zorzi and talisman AB de Villiers in quick succession.

The Giants completed their innings and reached 143/9 in their 20 overs. The Spartans still needed 109 runs in 89 balls when play was stopped and the match was ultimately abandoned.

Despite a few teething batting issues, Nelson Mandela Bay Giants managed to negotiate their way to a five wickets win over the Jozi Stars in the ...
Sport
3 years ago

The early damage for the Giants in defence of their total was caused by bowlers Junior Dala‚ Sisanda Magala and Carmi le Roux who claimed a wicket each while Theunis de Bruyn and Dean Elgar were unbeaten on 12 and 0 respectively.

The Spartans lost Cloete in the last ball of the second over for seven runs when he was caught by Magala from the bowling of Dala as they began their chase in a worrying manner considering that rain was on the horizon.

Cloete was soon followed by Tony de Zorzi who was the victim of Magala and the Spartans suffered a further blow in the fifth over when De Villiers was trapped in front by Le Roux having scored only one run.

Shortly after the departure of De Villiers‚ proceedings were brought to a halt when the umpires ordered players off the field due to lighting. There was no further play.

Faf du Plessis had made it almost halfway through his 24-minute press conference at Cape Town International Airport on Monday when Voldemort’s name ...
Sport
3 years ago

Key for the Spartans' cause with the ball was Sri Lankan import and spinner Jeewan Mendis with figures of 4/22 and at some stage he was on a hat-trick after successive wickets of Second and Magala in the 16th over.

The other important contributors for the Spartans during their bowling were impressive youngster Lutho Sipamla‚ who ended his shift on 3/29 after four overs‚ while Corbin Bosch and veteran Robbie Frylinck claimed one scalp each.

Earlier in the game‚ visiting captain Jon-Jon Smuts was the first wicket to fall on the day having contributed only 19 runs after he was bowled by Corbin Bosch and was caught by Sean Williams.

Duckett followed his skipper a few overs when he was stumped by Cloete from the bowling of Mendis.

Lubbe did not last long on the crease as he was caught by Dean Elgar from the bowling of Robbie Frylinck and the Giants collapse continued with quick wickets of Christiaan Jonker (5)‚ Marco Marais (47)‚ Second (26).