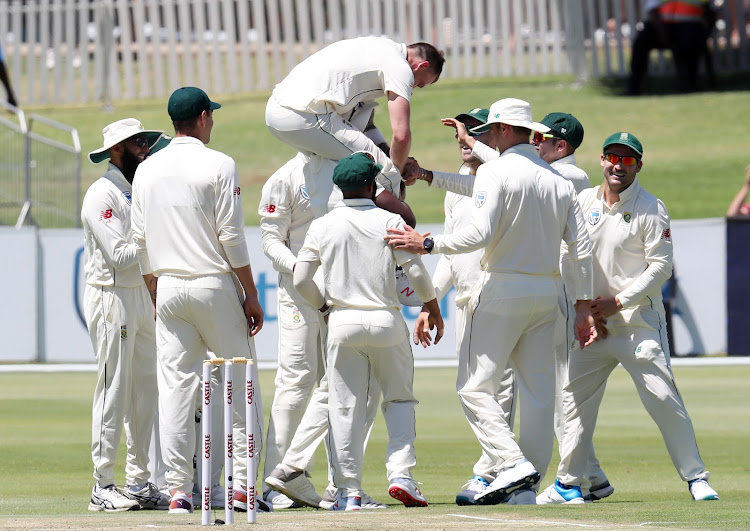 Dale Steyn of South Africa celebrates after Fakhar Zaman of Pakistan dismissed by Dean Elgar of South Africa during the 2018/19 Castle Lager Test Series match between South Africa and Pakistan at the SuperSport Park, Centurion on 26 December 2018.
Image: Muzi Ntombela/BackpagePix

Former Proteas captains AB de Villiers and Shaun Pollock led the applause for record-breaker Dale Steyn after he became South Africa’s most successful Test bowler during the first session of day one of the Boxing Day Test in Centurion on Wednesday.

De Villiers referred to Steyn as “simply the best” and a “legend” while Pollock‚ who held the record for almost eleven years‚ labeled him as the best Test fast bowler that South Africa has produced.

Steyn claimed his 422nd Test wicket to overtake Pollock on the Centurion ground where he honed his cricket skills before embarking on a journey that took him to the summit of the rankings for the better part of the last ten years.

The unforgettable moment came after 6.1 overs when Steyn delivered a length delivery that slightly moved away from Zaman but chased it only to get a thick edge that went straight to Dean Elgar at third slip for the catch.

“Dale Steyn‚ we salute you. What a man‚ what a player.

"Fitting that “Simply the best” is playing at SuperSport Park where everything started. Congrats legend‚” was a social media post by De Villiers.

Pollock said Steyn deserves his place in the record books.

“A heartfelt congratulations to Dale‚ he’s been a fantastic bowler for SA for long. His performances both home and away have been remarkable in so many ways.

"The fact that he is the best Test fast bowler that SA has produced‚ doesn’t require my endorsement as his statistics and record tell you that. He’s fully deserving of holding the record for most Test wickets and I hope that he goes on to take many more and continues winning games for the Proteas.”

It was also fitting that during the wild celebrations Steyn was hoisted in the air by Kagiso Rabada who has the potential to break the record in the future.

Former England captain Michael Vaughan‚ who was Steyn’s first Test victim‚ congratulated him as a top man and great bowler.

“The man who flattened my off stump with his 1st Test wicket is now the leading wicket taker in SA Test History. Well done Dale Sdteyn‚ great bowler and top man‚” he said in a tweet.

The Proteas went to lunch having restricted Pakistan to 76/4 after 25 overs with Duanne Olivier having removed Shan Masood and Asad Shafiq while Rabada and Steyn accounted for Imam-ul-Haq and Fakhar Zaman respectively.

“Dale is undoubtedly one of the greatest fast bowlers of all time and we are all very proud of his achievements‚ not just today‚ but throughout his chequered career‚" he said.

"He has been a star performer wherever he has played – and that includes his feat of becoming one of the handful of foreign fast bowlers to take 10 wickets in a Test match in India at Nagpur‚ in 2010.”