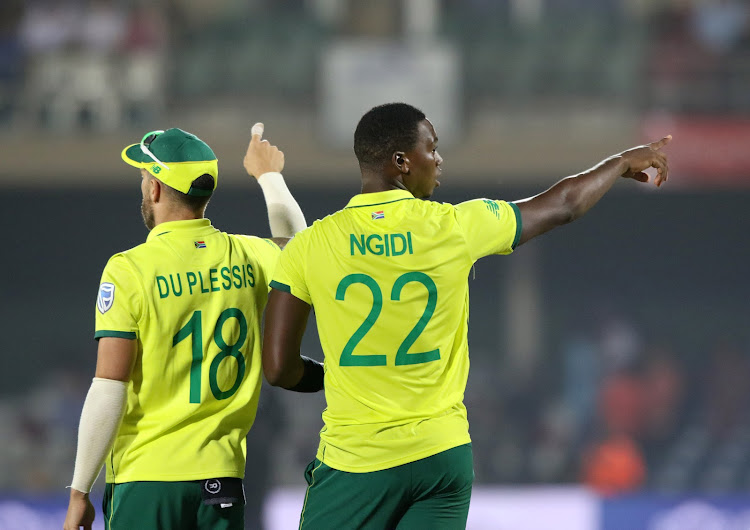 Faf Du Plessis and Lungi Ngidi of South Africa set the field during a match. Ngidi will miss the ODI series against Pakistan because of injury.
Image: BackpagePix

Batsman JP Duminy and fast bowler Lungi Ngidi have not recovered from injuries in time to be considered for selection to the Proteas ODI squad to take on Pakistan in a five-match series starting next week in Port Elizabeth.

Van der Dussen played two T20s for South Africa against Zimbabwe last year and he is likely to earn his first ODI cap during the series against Pakistan.

Paterson has not played for the Proteas in this format since his debut against Bangladesh in 2017 while Amla missed the recent series in Australia towards the end of last year through injury.

The familiar sight of Albie Morkel on the South African cricket fields is now in the past after the highly respected and former Proteas all-rounder ...
Sport
2 years ago

They make a welcome return to this squad that offers a number of World Cup clues.

“We need to look at all the options available to us as we get closer to selecting our final squad for this year’s World Cup.

"Rassie and Dane are two players who have been knocking strongly on the door in all formats‚” said CSA convener of selectors Linda Zondi.

The selectors have omitted Farhaan Behardien‚ Aiden Markram and Chris Morris from the squad for the first two matches but Zondi said they may be considered for the remainder of the series.

Zondi added that the World Cup door has not been slammed shut in their faces.

What does the Wanderers have in store for SA and Pakistan after last year's pitch fiasco?

“Those players who went to Australia and have not been selected for the first two matches – Farhaan Behardien‚ Aiden Markram and Chris Morris – are by no means out of the picture and they may well get further opportunities in the second half of the series.

"We are very happy with the way in which our Vision 2019 is taking shape.

"The series against Pakistan could not have come at a better time as they will provide a very stern test for the Proteas under conditions very similar to what we will experience at the World Cup‚” added Zondi.