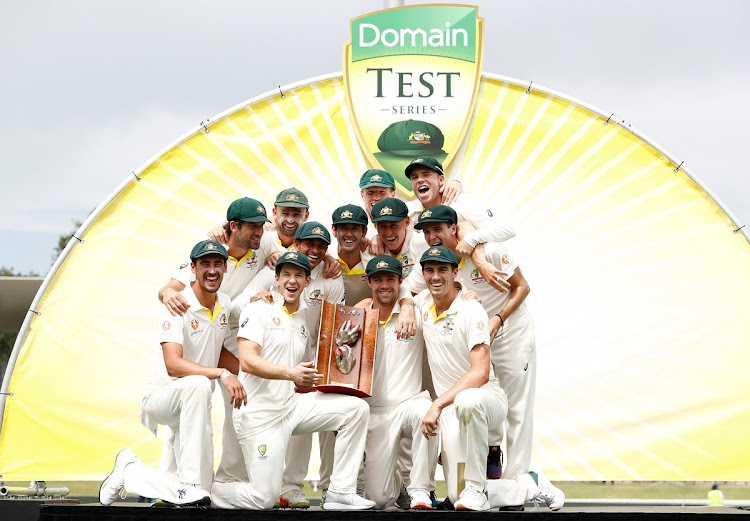 The Australian team celebrate with the Warne-Muralitharan Trophy after clinching a 2-0 Test series win over Sri Lanka at the Manoka Oval in Canberra.
Image: Cricket Australia/Twitter

Fast bowler Mitchell Starc picked up his second five-wicket haul in the match to lead Australia to a comprehensive 366-run victory in the second test against Sri Lanka and a 2-0 series win at Manuka Oval on Monday.

Chasing an improbable 516 for victory, the tourists were shot out for 149 by Australia, who won the opening Test in Brisbane by an innings and 40 runs.

The series win against Sri Lanka was the first for Australia since they thrashed England 4-0 in the Ashes early last year.

"It's nice to get some reward. I've said all summer this group has been working really hard," Australia captain Tim Paine said after the win.

"I think we're starting to build towards something so it's great to get some reward for the work we've been putting in.

"It doesn't matter what the wicket is like or who you are playing against."

Left-arm quick Starc bowled with the same aggression and pace that earned him a five-wicket haul in the first innings to finish with 5-46 and only his second match haul of 10 wickets.

Babar Azam was a picture of beautifully measured batting violence but his team mates somehow contrived to lose a game that should have been easily ...
Sport
2 years ago

Man of the match Starc began the day adding the wickets of opener Dimuth Karunaratne and Sri Lanka captain Dinesh Chandimal to his tally.

The paceman got a fast delivery to cut back into Karunaratne, who failed to add to his overnight score of eight, and breached his defence clipping the leg bail.

Chandimal was out for four when he guided Starc straight into the hands of Marnus Labuschagne at slip which ended a dismal tour for the right-hander, who aggregated 24 runs from four innings.

"We were outplayed as a team in all three departments," a dejected Chandimal, who said he was disappointed with his own performance, told reporters.

"Credit goes to Australia, they have played some outstanding cricket throughout the series.

"We need to work harder... specially as a batting unit we have to step up. That's the one are we are concerned about."

Sri Lanka promoted Niroshan Dickwella, who had made an attacking 64 in Brisbane, and he and opener Lahiru Thirimanne added 30 for the third wicket.

A sharply climbing delivery from Pat Cummins ended Thirimanne's knock of 30 when the fast bowler sprinted forward to take a diving return catch inches off the ground.

Starc returned for his second spell to dismiss Dickwella (27) and Kusal Perera, who was cleared to bat on Monday after being hit on the helmet by a bouncer on the third morning, in successive deliveries to take his match haul to nine.

Dhananjaya de Silva kept out the hat-trick delivery but fell right after the lunch interval to Jhye Richardson, spooning a catch to the mid-on fielder.

Kusal Mendis and Chamika Karunaratne stalled Australia's victory march with a seventh-wicket stand of 46 before the former found the fielder at cover with an uppish drive against leg-spinner Labuschagne.

Mendis fell for 42 while Chamika edged Cummins to be out for 22 as Australia inched closer to victory.

Paine brought Starc back to give him a chance to complete his 10-wicket haul and the quick bowled out Vishwa Fernando to complete the mark.

Cummins finished with 3-15 and was adjudged player of the series for his haul of 14 wickets from the two tests.