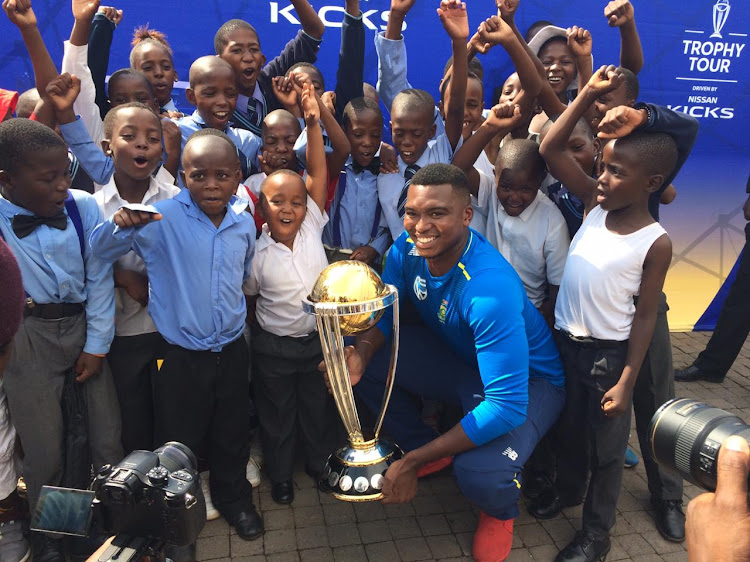 Proteas speedster Lungi Ngidi says he's not worried about the choker's tag that's normally associated with the South Africans ahead of an International Cricket Council tournaments.

Speaking at the ICC World Cup trophy tour that took place at Vilakazi and Khumalo Streets in Soweto where the Mandela House and Hector Pietersen memorial are located‚ Ngidi said the nature of the international game means the team that's better prepared will almost always prevail at the end.

“I don't know how people can associate a team with the chokers tag because in a knock-out game‚ whoever plays the best cricket on the day will invariably win the game‚" he said on Tuesday.

"It's international cricket‚ you'll win some and you'll lose some but you want to be as best prepared for the game.

"I've never played in a team that has been labelled that way and personally‚ I've never thought of the Proteas in that way.

"As a cricket fan‚ I sit and I watch and I can see certain situations in a game where some teams play better than others.

"I personally can't associate the chokers tag nor be worried about. The squad we have is a young one that's fearless.

"We'll go out there and play cricket because that's what we can do.”

The last time South Africa properly choked in an ICC tournament was in the 2011 World Cup quarter-final against New Zealand in Mirpur where they slid from 108/2 to 172 all out chasing 222 to win.

While they still haven't won an ICC trophy since the inaugural Champions Trophy in 1998‚ their subsequent tournament exits have been a bit more honourable.

The World Cup will be returning to the 1992 format where each team plays against each other once.

Ngidi wasn't around to witness the ground-breaking 1992 edition that was co-hosted by New Zealand and Australia but the grain in that tournament was quickly separated from the chaff.

"Each team will be facing each other and the best team will win at the end of the day‚” Ngidi said.

Ngidi‚ who has recovered from a knee injury he sustained in Australia in November‚ said he's raring to go after missing the entire first session of South Africa's summer.

The cricketer‚ who plays for the Titans‚ said he was available for their opening Momentum 1-Day Cup game against the Knights at SuperSport Park in Centurion.

“The final call is down to Cricket SA but from what I've been thinking‚ I haven't been playing a lot of cricket so to get back out on the field and get the competitive juices flowing would be a good idea.

"That's if I'm selected but I may have to come back to prepare a bit early hopefully. There's also the need to compete against international cricketers‚” he said.

“I'm good to go and I've been working very closely with the medical staff and they say they're confident with where I am and mentally I'm ready to go.

"There's processes that need to be followed in terms of going back to play and I'm definitely going to follow those processes but I'm raring to go.”