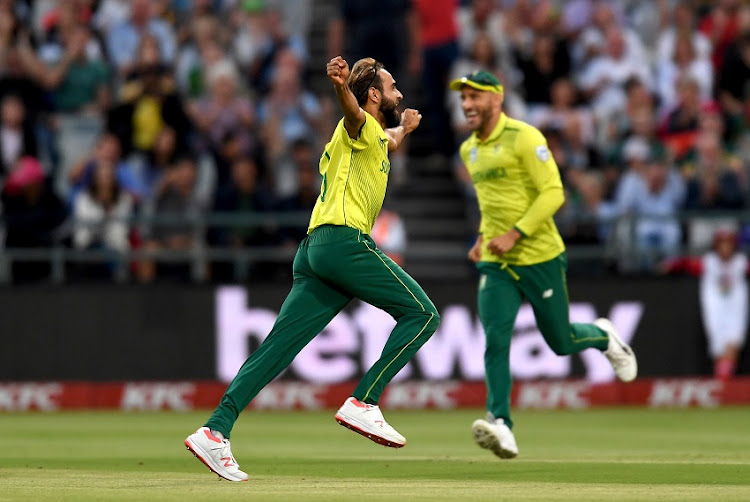 David Miller starred with the bat — twice — and the gloves to help South Africa reel off a sixth consecutive victory over Sri Lanka at Newlands on Tuesday night.

The home side, who won the one-day series between the teams 5-0, added success in a thrilling first T20.

That forced a super over, in which Miller and Rassie van der Dussen scored 14. Thisara Perera and Avishka Fernando answered with five for the Lankans, making South Africa the winners.

Miller’s 41 was his team’s best batting effort in their 20 overs, and followed his first foray into wicketkeeping in almost seven years.

Although regular stumper Quinton de Kock was part of the XI, Miller took on the job in a nod to his likely role as De Kock’s understudy at the coming World Cup.

South Africa’s bowlers kept the Lankans on a short leash throughout their innings, in which only three overs yielded 10 or more runs, none reached 15, and only four more runs were scored in the second half than the first.

That was decant considering Lungi Ngidi and Anrich Nortjé were non-starters because of side and shoulder injuries, which brought Lutho Sipamla into the squad — he had been in the group selected for the last two games.

And then there was wicketkeeper Miller, who was previously behind the stumps in October 2012. That’s if you can call a half-dozen games in two days at the Hong Kong Sixes keeping wicket in any proper sense.

Still, he looked the part when he pouched a routine catch from the second ball of the match, which Dale Steyn bowled and Niroshan Dickwella edged.

There was more complicated work to do in the 13th, when Imran Tahir ripped a googly across and past the left-handed Kamindu Mendis.

Miller read the delivery correctly, collected the ball neatly, and had the bails off with snappy glovework to claim a stumping.

That ended easily the Lankans’ best innings, what with Mendis hitting three fours and two sixes in his 29-ball 41 and featuring in two of their stands that made it into the 30s.

Andile Phehlukwayo quashed any ambitions the visitors might have had of posting a bigger total by taking three wickets between the 12th and 19th overs.

Reeza Hendricks had the chance to bounce back from scoring 42 runs in four innings in the ODIs, but he was run out for eight after De Kock called for a third.

South Africa’s top order had been cleared away with just 52 scored by midway through the 10th over, including De Kock and Faf du Plessis, who owned more than half their team’s runs in the ODIs.

Van der Dussen and Miller staunched the flow of wickets with a partnership of 66 — the biggest of the match — off 42 balls that seemed to clear South Africa’s path to victory.

But Lasith Malinga had Van der Dussen caught at third man for 34 in the 17th, and two balls later Miller was run out trying to take two.

Phehlukwayo and Kagiso Rabada came and went before the last over arrived with five required.

Left-arm fast bowler Isuru Udana conceded only two off the first four balls, and the pressure told when JP Duminy was run out trying to take a second off the fifth.

Dale Steyn should have been run out when Tahir’s bottom edge trickled to wicketkeeper Dickwella — whose throw somehow missed the stumps, allowing Steyn to scamper the single that levelled the scores.

Malinga bowled the super over for Sri Lanka, and Miller smacked him for six over square leg and four through extra cover.

Tahir stepped up for South Africa, and although he bowled two wides while De Kock — back in his gloves and pads — and Steyn dropped catches, the visitors couldn’t compete.