Hashim Amla saga harks back to past muddled thinking 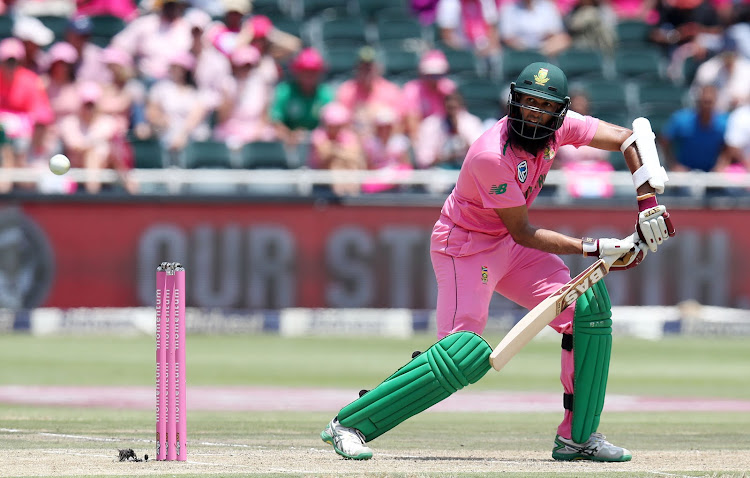 Hashim Amla of South Africa during the International One Day Series match between the Proteas and Pakistan at the Wanderers Stadium, Johannesburg on the January 27 2019.
Image: Muzi Ntombela/BackpagePix

If the agonising over Hashim Amla and the World Cup seems familiar‚ it should: South Africa have been shot in this movie before.

It stars Peter Kirsten and Jacques Kallis‚ and might be called Apocalypse Then‚ Again and Now.

Amla has devoted himself to helping to care for his ill father since the Test series against Sri Lanka last month.

That meant the stalwart missed the five one-day internationals and three T20s against the islanders‚ which ended South Africa’s preparations for the World Cup in England starting on May 30.

Amla answered some of the questions around his recent form by scoring 108 not out and 59 amid the 214 runs he made from five ODI innings against Pakistan in January.

But there is concern that the player who has been a fixture in South Africa’s ODI line-up for much of the past 11 years — but who has fallen far short of his Test average in four of his last five series in the format — may not be best placed to anchor the order in so important an assignment.

The young roadside cricketers who bowled over an SA legend

When cricket coach Gift Khuzwayo and cricket legend Pat Symcox saw one another across a dusty makeshift cricket pitch right next to the N2 where it ...
Sport
2 years ago

So‚ should Amla’s name be among the 15 Linda Zondi will announce on April 18?

Selection melodramas have complicated South Africa’s as yet unfulfilled ambition to win the World Cup since their first trip to the tournament almost 27 years ago.

Clive Rice‚ Jimmy Cook and Kirsten were left out of the preliminary squad of 30 selected for the tournament‚ apparently because they were 42‚ 38 and 36.

A petition calling for Rice’s inclusion drew more than 30 000 signatures and the Sunday Times published a photograph of him in a wheelchair being pushed by Cook.

The selectors’ idea of a compromise was to pick Kirsten in the final squad. And a good thing‚ too — his 410 runs in eight innings was the third-highest aggregate at the tournament.

Years later‚ Rice still hadn’t got over it: “I was very pissed off not to go. I never saw eye-to-eye with our chairman of selectors‚ Peter van der Merwe.

Faf du Plessis has a well-earned reputation as a daring captain who likes to push boundaries and it should not come as a surprise that it was his ...
Sport
2 years ago

“He was a total amateur when it came to playing the game and he was the same as a selector.”

Might the example Kirsten set have clouded thinking around the 2015 World Cup?

Kallis retired from Test cricket in December 2013‚ but he remained an important part of South Africa’s planning for the tournament.

The bubble burst in July 2014 when Kallis pulled the plug on his international career after scoring five runs in three ODIs in Sri Lanka.

“I realised in Sri Lanka that my dream of playing in a World Cup was a bridge too far‚” Kallis said. “I just knew on that tour that I was done.”

SA coach Ottis Gibson says long-time top order batting mainstay Hashim Amla is still part of his plans for the ICC World Cup in England in May.
Sport
2 years ago

Perhaps because South Africa are never as confident in the depth of their batting reserves compared to how many quality fast bowlers they have at their disposal‚ seeing their best players near the end of their careers has always caused anxiety.

Amla is undeniably among the finest they have yet produced‚ but he is also approaching his last innings.

Where South Africa will find another player of his stature isn’t his issue to resolve‚ and prolonging his time in the team to try and bridge the gap wouldn’t be fair to Amla‚ the team‚ nor the emerging generation of batters.

Perhaps that movie should be called Lord of the Runs: Crowning the New King.