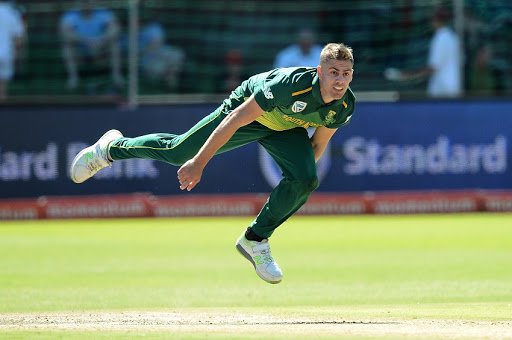 Anrich Nortjé, who was largely an unknown player in the past six months, is almost certain of a place in South Africa's squad for the Cricket World Cup.
Image: Isuru Sameera Peiris/Gallo Images

If‚ as the ancient Chinese philosopher Lao Tzu had it‚ “The journey of thousand miles begins with one step”‚ Anrich Nortjé is two steps ahead of schedule.

London‚ where the Cricket World Cup starts on May 30‚ is more than 6,000 miles — or almost 10,000 kilometres — from the Eastern Cape‚ where Nortjé is battling his way back from a shoulder injury that has kept him off the field for a month.

“I’ve been doing a lot of rehab and I’ve started bowling off three steps‚” the fast bowler said on Tuesday.

The good news for Nortjé is that he has‚ according to South Africa’s team management‚ been declared "available for selection" in the World Cup squad‚ which will be announced on Thursday.

Cricket South Africa chief executive officer Thabang Moroe has said that restructuring of the domestic game has been informed by the financial burden ...
Sport
2 years ago

So has Lungi Ngidi‚ who is recovering from a side strain and‚ like Nortjé‚ last played a game on March 16.

Both are scheduled to feature in “return to play” matches — part of Cricket South Africa’s protocol for managing players coming back from injury — late next week.

Ngidi‚ who has the lowest average among all the bowlers who have played more than one one-day international for South Africa this year and is behind only Imran Tahir in economy rate terms‚ is surely a certainty for the World Cup first XI.

Nortjé‚ who is second in the averages and third on the economy list in ODIs in 2019‚ has done more than enough in his four ODIs to earn a place in the squad.

Relations between administrators and players crashed to a new low on Thursday when Tony Irish was barred from attending a Cricket South Africa (CSA) ...
Sport
2 years ago

The most pressing question selection convenor Linda Zondi will answer on Thursday is whether Hashim Amla is on the plane to England.

Amla’s 7,910 ODI runs‚ including 27 centuries‚ in 171 innings make his selection as close to automatic as it could be.

But there will be concerns about his readiness for so weighty a challenge coming off the back of a testing time for him personally.