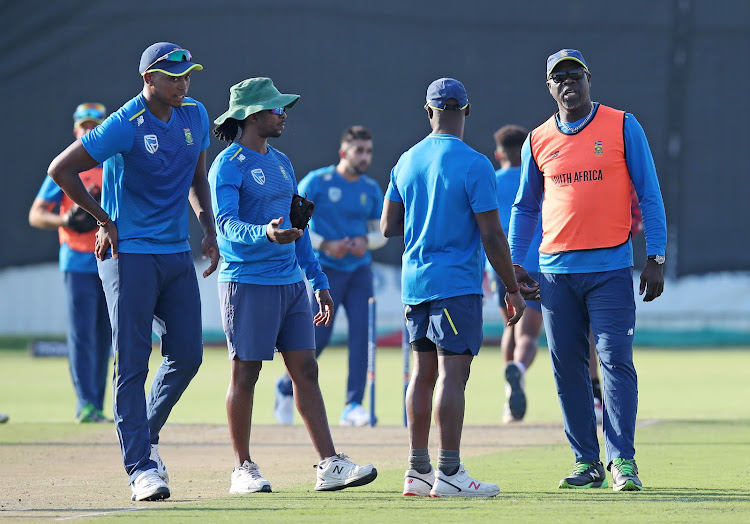 All things are not equal at the Oval‚ where England and South Africa will get the Cricket World Cup going on Thursday.

“I didn’t realise the away dressingroom was so small at the Oval‚” Ottis Gibson said on Tuesday.

“We’re squeezed in there nicely and we’re nice and tight to each other.

"Which is cool because we’ve been a tightknit group for the last 18 months.”

Gibson‚ now South Africa’s head coach‚ has twice served as England’s bowling coach — so he knows what the home side’s dressingroom looks like.

Just as he knows South Africa’s bowlers will take on the most gung-ho batting line-up in the game on Thursday.

“The one thing you do know is that they’re going to be aggressive‚ because that’s the way they’ve played for the last four years‚” Gibson said.

“So you can plan for that.

“They’ll play good shots but they’ll also give you opportunities to get them out. You’ve got to be brave and execute your plan. That’s what it comes down to.”

Dale Steyn out for England game but 'close to ready', says coach Gibson

Dale Steyn won’t be part of South Africa’s attack in their Cricket World Cup opener against England at the Oval on Thursday.
Sport
2 years ago

England have topped 350 five times and 400 once in the nine completed one-day internationals they have played this year‚ and they have been bowled out only twice.

South Africa have ventured above 300 just once in 10 games‚ when they made 331/5 against Sri Lanka at Kingsmead in March.

But they are following England’s lead at the crease‚ as Gibson said: “If you look at the way we’ve played in the last 12 months‚ it has been a little bit more expansive than you would normally see a South African team play.

“Probably not as expansive as England but we’ve gone out of our own bubble a bit and tried to be more positive and aggressive.”

Whatever batting approach South Africa take‚ Hashim Amla will be central to their efforts.

Amla stands tall‚ but SA bowlers have work to do

It’s been a while since the real Hashim Amla stood up‚ but he was unmistakable at Sophia Gardens in Cardiff on Thursday.
Sport
2 years ago

The stalwart took worries over his form and his own concerns over his father’s serious illness into the tournament with him‚ but cleared the way for his selection on Thursday by scoring half-centuries in the warm-up matches against Sri Lanka and West Indies.

Whether Amla should have been picked was a lively topic of discussion before South Africa’s squad was named‚ but as far as Gibson was concerned there was never a question over his inclusion.

“Was there a debate? I didn’t know there was a debate. Hashim is Hashim. He’s played well.

“Of course‚ he had a little dip in form [scoring 51 runs in four test innings against Sri Lanka in February] and he had a lot of other things going on that was occupying his mind.

“But he was selected‚ and he comes into the reckoning.”

England‚ the favourites to win the World Cup‚ loom among the tallest hurdles South Africa will look to leap at the tournament.

Gibson was looking forward to the reality check the clash will provide after months of plotting and planning his team’s campaign for the tournament.

“To play the hosts and the No. 1 team in the world is the best way to start because it gives us a real sense of where we are.”

There was a touch of mind games about that comment‚ and he laid it on thicker when he said: “I heard somewhere that both my two very good friends [Stuart] Broad and [James] Anderson have said England have to do something really bad not to win this World Cup.

“So‚ as far as they’re concerned‚ England have won it already.

“Our aim is to do our best.

"If that’s not good enough on Thursday‚ we have another game on Sunday [against Bangladesh‚ also at the Oval] and then another game on Wednesday [in Southampton‚ against India].

“Our aim is to be in the tournament at the back end.”

It’s not how you start; it’s how you finish. But it wouldn’t hurt to prove that the bigger team was in the smaller dressingroom.