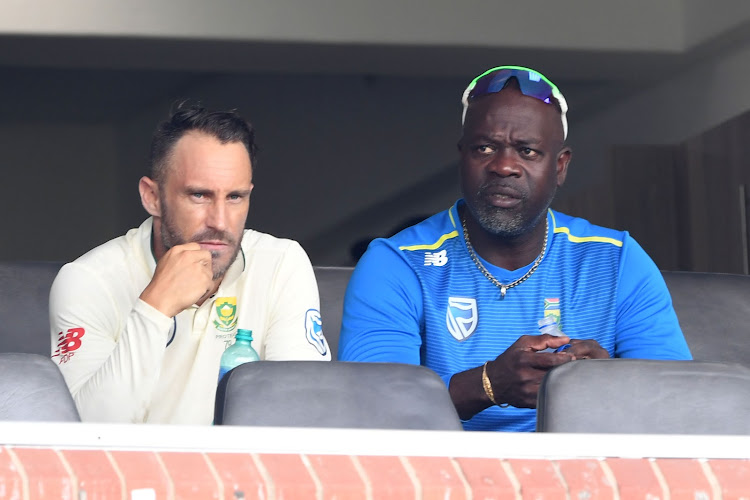 Faf du Plessis of the Proteas and Ottis Gibson (Coach of the Proteas) during day 4 of the 1st Test match between South Africa and Sri Lanka at Kingsmead Stadium on February 16, 2019 in Durban, South Africa.
Image: Lee Warren/Gallo Images

De Villiers retired from international cricket in May, but he spoke to Faf du Plessis during the last week of March about the possibility of a comeback and raised the issue with Gibson hours before South Africa’s squad was named.

By then he had made himself ineligible by not playing in the series against Pakistan and Sri Lanka in January and March — which he had been told he had to do to be in the mix for the World Cup.

“I don’t think you should have to beg a guy to play for his country but I did make it clear to him that I thought he was making a bad decision [by retiring] and that he could help us win the World Cup,” Gibson said.

“Since he has retired we have won every series we’ve played, and I haven’t had many AB questions. Suddenly we’ve come to the World Cup and we’ve had one bad week, and AB is the saviour.

“To come back the day before [the squad announcement] and say he’d like to come back would seem strange, to say the least.

“There are lot more people wanting AB to be here than AB himself. If AB wanted to be here, he would be here.

“But he is wherever he is in the world right now doing exactly what he wants to be doing. If he wanted to be here, he would be here.

“We can talk about AB all we want but he's not here and he cannot help us.”

Instead, South Africa have to help themselves. And quickly: they have lost their first three games, and if they don’t beat West Indies in Southampton on Monday their route to the semi-finals will be complicated.

“We have to keep believing in ourselves and in the people who are here to do well in the tournament,” Gibson said.

Of those people, Lungi Ngidi seems doubtful because of a hamstring injury but Rassie van der Dussen has overcome a groin problem.