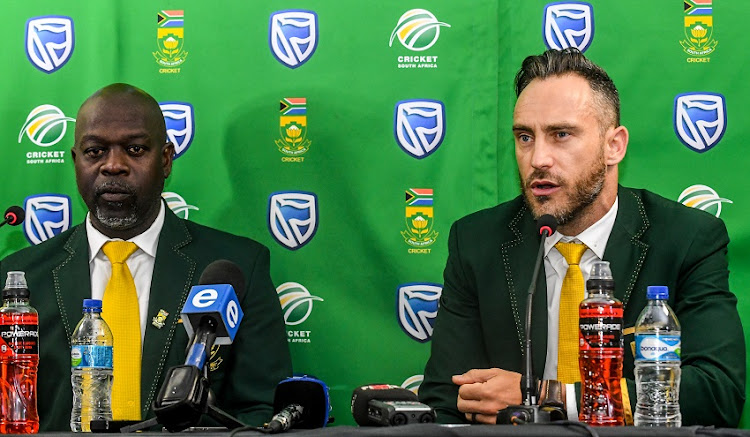 Cricket South Africa (CSA) would seem to have hit the panic button in reaction to their men’s team’s poor performance at the World Cup.

Ottis Gibson is no longer the coach‚ the status of Faf du Plessis‚ the all-format captain‚ appears to be in question‚ and much of the currently separated authority in and around the side will be fused into one position — a czar of sorts.

“I would like to thank Ottis Gibson‚ other members of the team’s current senior management‚ and our long-serving team manager‚ Dr. Moosajee‚ for their national service to South African cricket‚” chief executive Thabang Moroe was quoted as saying in the last paragraph of a release on Sunday.

The conclusion of Mohammed Moosajee’s 16 years as South Africa’s doctor and manager has for weeks been a fait accompli.

His “tenure comes to an end in September”‚ the release said.

The departure of Gibson‚ who presided over five losses in the eight completed games South Africa played at the World Cup‚ was confirmed by a CSA spokesperson on Sunday.

“Members of team management‚ including the various assistant cricket coaches‚ will not be retained as part of the forthcoming plan‚” the release said.

“In relation to the imminent tour of India‚ the chief executive and the acting director of cricket will appoint an interim management team‚ selection panel and captain for this assignment.

“In the meantime‚ CSA will advertise the positions of director of cricket‚ team manager and convenor of selectors.”

Linda Zondi is in the latter role‚ but has reached the end of his term.

But he could stay on in a new permanent capacity in what has hitherto been a part-time appointment.

The release detailed a “dynamic new structure that will … see the appointment of a team manager who will take overall charge of all aspects of the team”.

The manager “will appoint his coaching staff as well as the captain(s)” and the “coaches‚ the medical staff and the administrative staff will all report directly to him”.

As of now‚ the closest CSA have to someone in that job is Corrie van Zyl — their manager of cricket pathways — who will serve as director of cricket in an acting capacity until a permanent appointment is made.

“This effectively means that all cricketing decisions within the system will be managed by the acting director of cricket."

That position is‚ however‚ separate from the czar’s.

“In terms of the new structure the team manager‚ similar to football-style structures‚ will report to the (acting) director of cricket who will in turn report to the chief executive.”

The radical sweep of the overhaul was played down in quotes attributed to Moroe: “This change will herald an exciting new era for the SA cricket and will bring us into line with best practice in professional sport.

“I must stress that the new structure was not a rash decision. It was taken after much deliberation by the board‚ taking all the factors into consideration about the current state of our cricket and also the plan that we need to get to within the timelines we have set.”

CSA have called a press conference in Johannesburg on Tuesday.