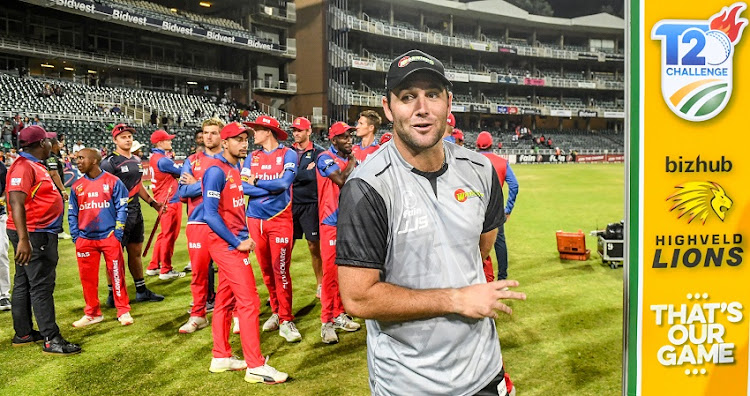 Jon Jon Smuts of the Warriors during the CSA T20 Challenge final match between bizhub Highveld Lions and Warriors at Bidvest Wanderers Stadium on May 05, 2019 in Johannesburg, South Africa.
Image: Sydney Seshibedi/Gallo Images

That doesn’t sound especially different to what Smuts might have brought‚ except that he is a better batter.

But Smuts is no longer in the mix for the three-match series‚ which starts in Dharamsala next Sunday‚ after “failing to meet the team’s fitness standards”.

That’s according to a Cricket South Africa release on Thursday‚ which also said the uncapped Linde would replace him.

Smuts declined to discuss the specific reasons for his axing when TimesLIVE contacted him on Thursday‚ but in effect has been labelled out of shape.

He last time he picked up a bat was in May‚ when he scored 121 at better than two runs a ball in a losing cause for the Warriors in the T20 final against the Lions at the Wanderers.

It’s impossible to believe that performance wouldn’t have made Smuts spend the winter keeping himself in good physical nick‚ what with the series in India then on the horizon.

That was surely the case even though he played the most recent of his eight T20 internationals in February last year‚ and that South Africa have since had 11 games in the format without him.

But‚ apparently‚ the science says otherwise and Smuts’ loss is Linde’s gain.

We know Linde’s fitness is up to scratch because he is already in India playing for South Africa A.

Those are hardly numbers to write home about‚ but fitness protocols have become part of the gospel of the increasingly frenetic modern game.

Linde had a better batting strike rate than Smuts in last year’s Mzansi Super League — 153.57 versus 117.74 — but it was difficult to separate them in bowling terms‚ where Linde’s strike rate was 7.80 and Smuts’ 7.81.

And with allrounders of the calibre of Andile Phehlukwayo and Dwaine Pretorius also in South Africa’s squad it’s doubtful whether Smuts or Linde or anyone else would have got a look-in anyway.

But Smuts sounded deeply disappointed at his fate‚ and so he should.

He turns 31 in just more than two weeks and‚ having fallen out of favour‚ this was probably his last chance to stake a claim to go to next year’s T20 World Cup.

It’s up to him to make it count.