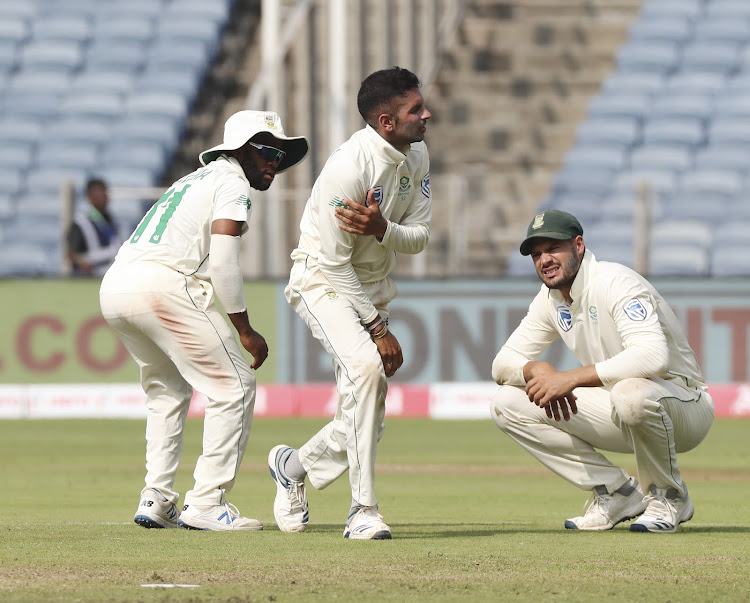 Keshav Maharaj wouldn’t have known whether to laugh or cry in Pune on Friday‚ even though he might have been too tired and sore to do either.

On the same day he reached 100 Test wickets in the second-fewest number of matches for a South Africa spinner‚ Maharaj also banked his team’s all-time third-worst innings figures‚ a dispiriting 1/196.

He also dropped a tough return catch offered by Virat Kohli when he was three not out on his way to an undefeated 254.

Then‚ when he was five overs away from breaking his own South Africa record for bowling the most overs in an innings — 55‚ set a week ago — Maharaj jarred a shoulder in the field and was taken off to hospital for a precautionary scan.

The small mercy was that meant he didn’t have to endure the last few jerks of an India innings that reached 601/5 before Kohli declared.

Neither did he have to watch South Africa stumble to 36/3 in reply at stumps on day two of the second men’s Test.

But did Maharaj feel any better than Senuran Muthusamy‚ who thought he had had Kohli superbly caught by Faf du Plessis diving forward from first slip — only to be denied by his no-ball?

And a good thing‚ too: Muthusamy had overstepped once more.

Diabolically for a spinner‚ he sent down five no-balls in the innings.

Not that Muthusamy was the only bowler to blame for India’s dominance.

“We’ve got ourselves to blame‚” Enoch Nkwe told reporters in Pune.

“This morning conditions were conducive to seam bowling and we didn’t hit our straps. We bowled too wide and we didn’t test the batters enough.

“We let ourselves down.”

That’s never good‚ and far less so when a player as ambitious as Kohli is as determined to own the game like he was on Friday.

He shared 178 with Ajinka Rahane and 225 with Ravindra Jadeja‚ joined Garfield Sobers and Kumar Sangakkara in reaching 7 000 career runs in 138 innings — only Wally Hammond‚ Virender Sehwag and Sachin Tendulkar have got there in fewer trips to the crease — and scored his seventh double century‚ the most by an India player.

Above and beyond all that‚ Kohli put the South Africans through the grinder like no-one else could.

He made them look ordinary‚ as if they wished they were anywhere but on the same field as him watching him reap runs with what what looked like ease and finding themselves helpless to stop the flow.

Or‚ as Hashim Amla put it in SuperSport’s studio when asked to put Kohli’s innings in context: “It’s like a Ferrari 4x4 — it’s fast when it needs to be fast‚ it’s easy on the eye when you look at it‚ and when you sit inside it you see the quality.”

Only Jadeja heaving Muthusamy down long-off’s throat when he was nine short of a century stopped the bleeding by triggering the declaration.

But the day’s troubles were still not done. First Aiden Markram was trapped in front‚ then Temba Bavuma was caught behind‚ and then Dean Elgar played on.

The latter‚ up there with the hardest bastards in the game‚ stood at the crease for a long and tortured moment afterwards; hand on hip and head cast to the sky in annoyance. At least‚ that’s what it looked like. What was he really thinking?

Who can say‚ but probably not that South Africa teetered similarly after two days of the first Test in Visakhapatnam.

Then‚ they were 39/3 — and still batting at stumps the next day on their way to a total of 431. Thing is‚ Elgar was not out after two days in Vizag and en route to a gritty 160.

With him gone South Africans will have no difficulty knowing whether to laugh or cry.

Weary SA look for ways to bounce back in India

There doesn’t seem to be much news value in the fact that Faf du Plessis appeared at his captain’s press conference before the second men’s Test ...
Sport
2 years ago

Rabada's back‚ but India's batters won't go away

India captain Virat Kohli closed in on a sparkling double hundred to guide the hosts towards a massive first-innings total in the second test against ...
Sport
2 years ago