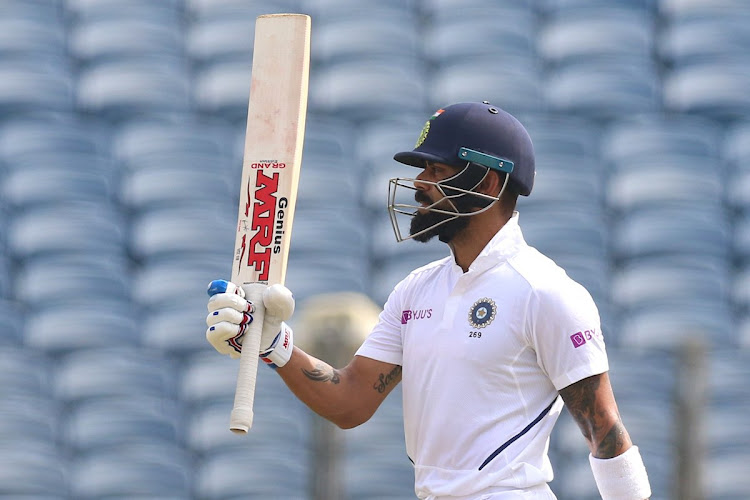 India captain Virat Kohli closed in on a sparkling double hundred to guide the hosts towards a massive first-innings total in the second test against South Africa at Pune on Friday.

The 30-year-old, in his 50th test as skipper, was unbeaten on 194 after bringing up his first test hundred of the year, and the 26th of his career, as India reached 473 for four at tea after resuming the second day on 273-3.

Ravindra Jadeja was unbeaten on 25 as the hosts, who lead the three-test series 1-0 after their opening win in Visakhaptanam, went through Friday's first session unscathed and lost just a single wicket in the second.

After the 138-run stand for the second wicket between centurion Mayank Agarwal and Cheteshwar Pujara on the opening day, it was the turn of Kohli and Ajinkya Rahane to turn the screw on South Africa with a partnership of 178.

What a player!@imVkohli brings up his 7th Double Hundred 👏👏#INDvSA pic.twitter.com/vDgOIRhNOW

Kohli, who has hit 28 fours in his knock, and Jadeja added a further 97 for the unbroken fifth wicket.

Armed with the second new ball, which was about five overs old, Kagiso Rabada and Vernon Philander started off strongly to keep the batsmen on their toes.

There were not many scoring opportunities provided by the fast bowlers and most runs during the first 30 minutes came off the edge of the bat.

The frustrating wait for a breakthrough continued for the South Africans as Kohli, who was dropped on three by spinner Keshav Maharaj off his own bowling on Thursday, had at least three edges elude the fielder behind the wicket.

Once the ball had lost a bit of shine and the pitch some movement, Kohli opened up and converted his knock into a hundred in his fifth test of 2019.

Trademark drives on both sides of the wicket flowed from the right-hander's bat as India piled on the runs in their first innings on a surface expected to assist the slow bowlers more as the match progressed.

A sublime straight-driven boundary off Philander brought up the hundred for Kohli, who also has 43 tons in the 50-over format.

Rahane survived a run out chance and hung around to complete his half-century, hitting eight boundaries in his knock of 59 before falling to Maharaj.