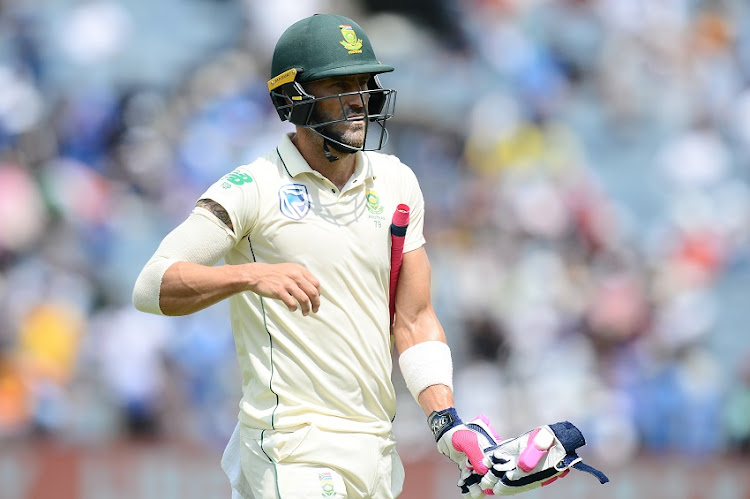 Faf du Plessis captain of South Africa walks back after been dismiss during day 3 of the 2nd Test match between India and South Africa at Maharashtra Cricket Association Stadium on October 12, 2019 in Pune, India.
Image: Isuru Sameera Peris/Gallo Images

The light that left Faf du Plessis’ eyes during the men’s World Cup this year receded further still as he picked over the bones of South Africa’s dismal performance in their Test series in India.

The home side won the second match of the rubber by an innings and 137 runs‚ their biggest ever victory over South Africa‚ on the fourth day in Pune on Sunday.

With that they clinched the series ahead of the third Test in Ranchi‚ which starts on Saturday.

India dominated in all departments even more emphatically than they did to win the first Test in Visakhapatnam by 203 runs last Saturday.

Sunday’s success was their 11th consecutive success in a home rubber‚ a world record.

“You don’t mind losing to a team better than you but in this Test we didn’t even come close to where we needed to be to compete; we let ourselves down‚” captain Du Plessis‚ who also presided over South Africa’s five losses in eight completed games at the World Cup in England‚ told reporters.

“There’s still fight from the guys‚ hanging in there and trying to compete‚ but there’s a lot of questions that need answers and players need to put their hands up.”

Dean Elgar and Quinton de Kock scored South Africa’s only centuries of the series in the first innings in Vizag‚ and just two of their four half-centuries have been made by a frontline batter — both by Du Plessis himself.

Ravichandran Ashwin’s haul of 14 wickets is more than double the six claimed by South Africa’s leading bowler‚ Keshav Maharaj‚ who is out of the third Test with a shoulder injury.

“With a very young team and a lot of new faces‚ consistency would be one of the things we would try and work towards‚” Du Plessis said.

“We took one step forward in the first Test but took two back through not being consistent.”

South Africa’s XI in Pune have 357 caps between them‚ or 217 fewer than the side put out by India‚ the world’s top-ranked team.

“Your best Test teams are those with the most experience and guys that have been through it‚” Du Plessis said.

“This Indian team is experienced. We have lost most of our experience. You don’t replace those guys overnight.”

South Africa’s entire side in Pune have 60 fewer caps than those won by Hashim Amla‚ AB de Villiers Dale Steyn and Morné Morkel‚ who have all retired since the team’s last Test series in India‚ in November 2015.

But Du Plessis declined to blame that factor for the way events have unfolded.

“Even with a lot of inexperience in our team we never came here thinking we were going to roll over and die.

“We are a very proud cricketing nation and our performance in this Test doesn’t do that justice. I am hurting and I am sure the guys are‚ too.

“It’s about trying to make sure this team can get better‚ even if you do a few things wrong.

“Even in real tough times‚ makes sure you try and find learning where the player can get better‚ otherwise we are not moving forward as a group.

“Hopefully in a few years’ time we can come here and young players who have gone through bad experiences have got stronger.”